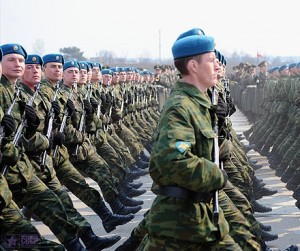 Russian paratroopers on parade. Caucasus 2012 will see participation of airborne troops and involve areas longer south than ever before, including Armenia as well as Georgia's breakaway regions South Ossetia and Abkhazia. (Photo: Mikhail Mikhin.)

The exercise is called ‘Caucasus 2012’ and is organized by the Russian South Strategic Command, one of four geographical divisions making up Russia’s territorial defense.

Caucasus 2012 will involve a larger geographical area than previous exercises, according to Russian defense sources. Not only will it involve activity in Armenia, where Russia has a military base, but also inside Georgia’s two breakaway regions, where Russia has steadily built up a larger and more extensive military presence after the war in August 2008.

The fact that a Russian military exercise for the first time will involve land areas south of Georgia as well as inside its breakaway parts raises the alarm in Tbilisi.

Nika Laliashvili, the member of the parliamentary opposition party Christian Democrats Movement, calls Caucasus 2012 ‘alarming’ and says the exercise is ‘a bad coincidence with the upcoming presidential elections in the Russian Federation.’

Other countries were briefed about the exercise last December when foreign military attaches in Moscow were summoned to that country’s military chief of staff.

All kinds of forces under the Defense Ministry will participate in the exercise, as well as the Interior Ministry, Federal Security Service (ФСБ), Ministry of Emergency (МЧС) and the Federal Protection Service forces (ФСО), and also representatives of other law enforcement agencies.

It will integrate a broad range of intelligence and communications resources, including satellites, unmanned aerial vehicles and high-precision weapons.

An exercise with almost the same name was organized in the summer of 2008, at a time of repeated cross-border shooting incidents and high tensions along the border with both breakaway regions. According to Nezavisimaia Gazeta, ‘Caucasus Frontier 2008’ contributed to the quick defeat of the Georgian military.

The newspaper also mentions that this year’s exercise won’t be only operative-tactical, but also strategic and will involve not only armed forces, but border, air, aerospace defense, airborne forces, interior ministry, security, federal defense and emergency services. The exercise will involve what is called the Air Defense Force Management System, which controls the skies not only over Russia, but also the South Caucasus, including Armenia, the location of Russia’s 102nd military base , Nezavisimaia Gazeta reports.

Laliashvili says the unprecedented scale of this exercise is worrying, and Georgia should speak up about it to its Western friends.

The Georgian Foreign Ministry has already expressed concern, as reported on DFWatch. The statements says that Russia is determined to militarize the occupied territories, is improving its military infrastructure and deploying offensive weapons, and this way provoking permanent tension in Georgia and in the Black Sea region.

“The international community should pay attention to the fact that the Russian foreign policy is not changed. It continues aggressive actions, including demonstrating military forces and provocations. Russia is the source of destabilization and negative events on the international arena,” the statement says.

Nezavisimaia Gazeta reports that the background for the exercise is increased tension in the Persian Gulf and the danger of a U.S.-Israeli attack on Iran and that this would necessitate steps to protect the Russian troops stationed around the Caucasus region.