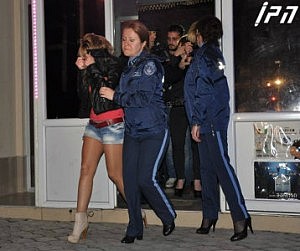 Photo shows an earlier police razzia of a brothel in Adjara, November 2013. (Interpressnews.)

According to the Interior Ministry, the suspect rented a house on Chavchavadze Avenue 33 and opened a parlour offering Chinese massage.

The facility was used by Chinese women involved in prostitution, investigators say. 2,895 laris was confiscated, money which was made on prostitution in the parlor. The personnel working there have been questioned. Four women were fined for prostitution.

The investigation is continuing.

Chinese citizens have been detained in Georgia for prostitution related crimes a number of times in the past. In downtown Tbilisi there were opened several Chinese massage parlors. In the end of 2013, police detained four Chinese for organizing prostitution on Akhvlediani Street. 40 women were working as prostitutes in four facilities on the street.