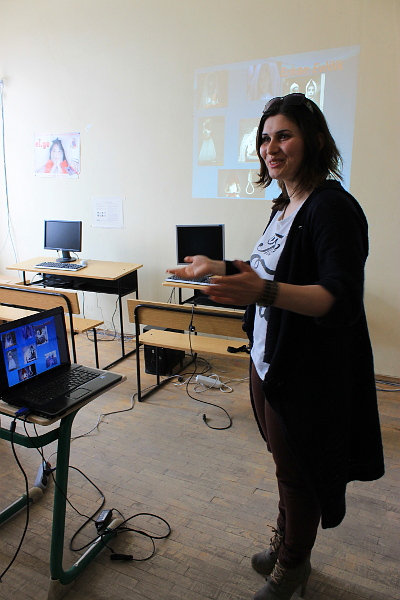 Marneuli, DFWatch–“The man thinks that she is still a child, she doesn’t know anything, and that is a good thing for her,” says Samira Bayramova, a women’s rights activist in Marneuli working to prevent young girls from becoming child brides.

“Mothers-in-law support this as well, because they hope to raise those girls their way and teach them what they want,” she continues.

Bayramova, 26, is an advocate for gender equality, and travels from school to school explaining to the youth why early marriage creates problems for them.

Georgia as a whole has one of the highest rates of underage marriage in Europe. 17% of women get married under the age of 18 in Georgia, according to the United Nations Population Fund (UNPF).

The practice seems concentrated in particularly some rural regions, as here in Kvemo Kartli.

We met Bayramova as she was talking to 8.-12. graders at Public School No 3 in Marneuli, encouraging them to say no to forced and underage marriage.

“Don’t listen to your parents if they want you to get married. It’s your life, not theirs,” she said to a room full of Azeri teenagers.

Bayramova says bridegrooms are usually 23 years or older in this part of Georgia. It is not uncommon for the groom to be a decade older than his wife – for example, he is 28 and she is under 17.

Only on very rare occasions do teenage brides marry boys their age in this predominantly ethnic Azerbaijani town.

Bayramova works together with an NGO called Journalists’ Network for Gender Equality with organizing meetings with students at public schools in Marneuli and surrounding villages. At the meetings, they talk about the social, psychological and physical damage of early and forced marriage.

She tells the students about the negative consequences of early marriage. For example, a 15-19 year old girl has a twice as high risk of experiencing a complicated pregnancy and childbirth as a 20-30 year old woman. In addition, they don’t finish secondary education, which makes them less competitive in the labor market, more vulnerable and more likely to become victim of domestic violence and sexual abuse.

Also, young families often don’t have sufficient income, so their parents end up supporting them, which leads to their involvement in a young couple’s relations. 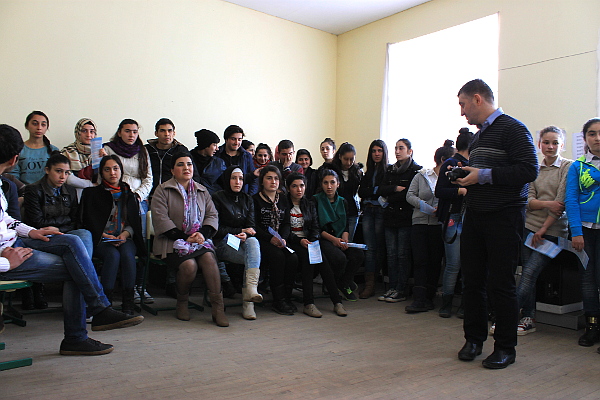 Not a religious problem?

Studies indicate that child marriage is more common in rural, religious or national minority communities, such as Adjara, Pankisi, and Azeri villages in Kvemo Kartli and Kakheti.

The study also showed that 26.6% of the Kvemo Kartli population support arranged marriages, and ethnic Azeris tend to be more supportive of it than Armenians and Georgians.

As both regions are home to Muslim communities, underage marriage in Kvemo Kartli may be assumed to be connected with Islamic traditions, but Bayramova disagrees.

In her opinion, ethnic Azeris are not very keen on following religious practices, therefore the underage marriage problem is more likely caused by rural traditions and social and economic conditions than by religion.

Why do girls marry early? First of all, the lack of opportunities in villages leaves a teenage girl with only two choices: school or family. According to Bayramova, there is nothing to do for youngsters in a village, they don’t get out much to Marneuli or any other city, and their days consist of going to school and coming home. “They don’t see anything in their lives, they don’t have any dreams, nothing,” Bayramova explained.

She painted a dire picture of the lives of youth in Azeri villages around Marneuli. A girl sees only two suitable ways forward: school or family. “And if they don’t want to study, they get married.”

In addition, families in rural areas are poor and don’t see a girl’s education as a necessity, especially in a traditional society with highly segregated gender roles. “In the Azeri community, family, and not studies, is the place for girls and women,” Bayramova added.

As DFWatch has reported earlier, 7,367 girls dropped out of school after receiving a basic education (7th-9th grade) in 2011-2013, according to figures from the Public Defender’s Office. Most of them were from Kvemo Kartli. Although the reasons are not specified, early marriage may account for a part of these.

Another motivation is that some girls get married because they hope to become more independent from their families, according to Bayramova. But instead of achieving independence, they have to adjust to living with their in-laws.

She told us a story about a girl she knows who got married when she was 13 years old, because she wanted to be independent from her parents. But later she realised that living with in-laws and obeying a strict mother-in-law is even worse than living with her parents. “She is still married, has two children, but is not as independent as she hoped,” Bayramova explained.

She added that in Azeri culture, a girl is expected to move in with her husband’s family, which creates additional obstacles in her life.

Another reason why girls want to marry at a young age, is the wedding day: “They simply want to wear a white dress, get a lot of presents and gold.”

Also, according to her, young girls tend to mistake teenage lust with ‘real love’. And, since society condemns premarital sexual relations, especially for girls, it is not ‘normal’ to date and have a boyfriend. This adds additional pressure to get married.

Changes in the law

The Civil Code of Georgia stipulates that the legal age of marriage is 18. However, it allows exceptions, when one or both spouses can be 16 years old. Cohabitation with a person under age of 16 is considered a crime and is punishable by up to 3 years in prison.

Mari Nikuradze contributed to this article.