Cherchez la femme: look for the woman in Georgian politics

Cherchez la femme: look for the woman in Georgian politics 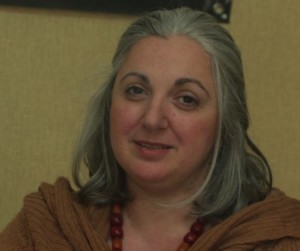 Nina Tsihistavi is a researcher in gender issues and women's rights activist.

It was a long way of looking for the women in Georgian politics. For the last decade, the only explanation for the lack of women in positions of power was: women are not ready themselves, are not showing will, writes Nina Tsihistavi, researcher in gender issues and women’s rights activist.

Despite the hardly heard murmur of local women empowered by foreign advise, the percentage of women in elected bodies was diminishing, and in appointed positions in the government as well. During the history of Georgian parliamentarism, the percentage dropped from 9 to 7 to 5, and in local government it fell from 11 to 9 per cent women, thus they hardly (nominally) participated in the process of making decisions for all of us.

With cuts in the budget in terms of health, education and social affairs, women were to submit their mandates for raising military and generally law enforcement budget lines in one voice with their male colleagues for ensuring the readiness to join the brotherhood.

Nowadays, a majority of the ruling party finally is ‘baked’: probably the perfume used by the few women delegates is finally perceived by MP men, or allergy is no more attacking them within the parliament building or, maybe the scent of women in the parliament is making ‘magic motivation’ to increase it more and more – so the decision was finally made and the December 28th 2011 brought us amendments1 in the Law on Political Association of Citizens of Georgia, which is allowing women to be ‘welcomed onboard’ once the political party/association is thinking to somehow increase its money from the state budget. Imagine full 10% additional Georgian money for having increased scent of women if they have 2 women out of 10.

Frankly speaking, there were no radical improvement in all previous years, and there is hardly done anything now either to make the equity horizon come closer, and still I am questioning this action and am looking for hidden motives behind the amendment.

The change in legislation is made only for a bullet point reports provided from the government to its potential donor/partner countries – additional bullet point in the list of evidence that western values are respected.

Otherwise, ordinary women of Georgia cannot understand why the government is cutting their access to social and political lives through a pseudo- labor code, no more free-of-charge kindergartens, no free-of-charge childbirth, no security measures through having not investigated dozens of cases of gender-based violence, having feminization of unemployment and hidden discrimination (labor force participation: 59 female to 78 male; estimated earned income: female 2 771, male 7 030; legislators, senior officials and managers: female 34, male 662).

What women want in Georgia? Mel Gibson’s skills are not needed to identify women’s needs here. President Saakashvili would rather ask Sharon Stone and some of local prima ballerinas. As for society, all needs have been articulated and submitted to all relevant bodies quite a while ago: sustainable and stable peace, and a positive one, where life is important and mother-and-child mortality is not scaring pregnant women, where impunity, sexism, ageism are combated, the state is respecting participation and offering childcare, health and social security, domestic violence is prevented, women are not suffering in prison and are not under political persecution, illegal migration is not an option for bringing family security or child education.

Instead of governing so as to make all of the above a reality, our government is only declaring commercialization of women’s participation in politics in exchange for bucks. Does it mean that the Georgian parliament is ready to buy more scent of women within? Thus we might even increase the income of the perfume shops in Georgia. Also an output.