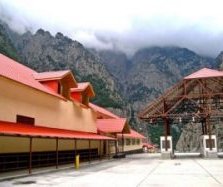 Verkhny Lars, the only functioning border crossing between Georgia and Russia. (Interpressnews.)

TBILISI, DFWatch–Chechen strongman Ramzan Kadyrov proposes building a new railway as well as a new road connecting the Russian republic with Georgia, which still has tense relations with Russia.

Kadyrov’s provocative plan was launched at a press conference in Grozny.

In Tbilisi, his statement was  written off as unreliable.

Sergi Kapanadze from the former ruling National Movement party headed by ex-President Saakashvili said a new road would be a security threat as it could be used for military purposes.

The Caucasus region is characterized by closed borders, and suspended relations. In the north-south direction, Georgia and Russia only has one functioning border crossing, and in the east-west direction, Armenia is blocked off from Turkey where both railway and road traffic is closed for political reasons. An important railway through breakaway Abkhazia connecting the whole South Caucasus to Russia was closed in the Abkhazian war in the 1990s, but has recently been proposed reopened.

Chechnya has historically been a source of discord in relations between Georgia and Russia. During the two Chechen wars, Pankisi valley in the north of Georgia was allowed used as a base for Chechen rebels. Also in recent years, there have been claims that Georgia continues to support Chechen rebels.

The last time such claims surfaced was after the border shooting in Lapankuri in 2012. The ombudsman wrote in a report earlier in 2014 that the Saakashvili government trained Chechen rebels and prepared them for insertion into Chechnya.

Harsh special operations during Kadyrov’s rule succeeded in displacing the jihadist rebels who moved into neighboring Dagestan – another Russian republic which borders on Georgia.