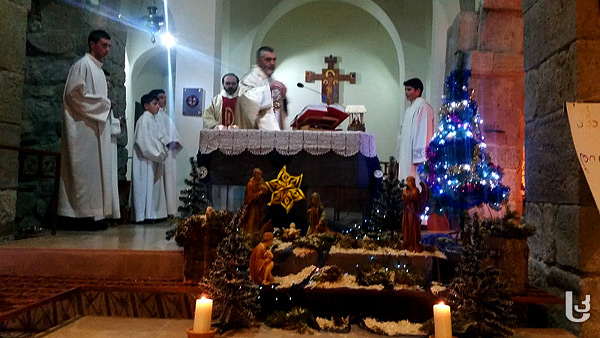 TBILISI, DFWatch–The arrival of Christmas was observed Saturday night at several churches in Georgia with Midnight Mass at the Catholic Assumption of the Virgin Mary Church in Tbilisi and in the Protestant Holy Trinity Church in Batumi.

The ceremony in Batumi started 10pm and foreign tourists also attended the mass which was conducted by Father Gabriel Bragantini.

Bragantini blessed the parish, calling on them to love each other. Later on Sunday, there was a prayer with school children singing and performing a nativity play.

The Tbilisi ceremony started a bit later. It was conducted by Giuseppe Pasotto, Apostolic Administrator of the Caucasus.

There was also Catholic mass at the church in Rabati, Akhaltsikhe, in the southwestern Samtskhe-Javakheti region. It was conducted by Father Philipe.

In his Christmas greeting to citizens who celebrate it on December 25, President Giorgi Margvelashvili wished peace, love and happiness to every family and to the country as a whole.

“Georgia is an ethnically, culturally and religiously diverse country,” he wrote in a short statement, adding that it is a tradition in Georgia to respect these differences and recognize the valuable contributions to the country made by citizens with a different belief.

The Georgian Orthodox Church, like the Orthodox churches of Russia and Ukraine, follows the old Julian calendar, according to which Christmas is on January 7.

According to the most recent data, less than one percent of the population in Georgia are Catholics, more than 10 percent are Muslims and less than 3 percent are Armenian Christians. More than 83 percent are adherents of the Georgian Orthodox Church, while 2 percent hold other beliefs.