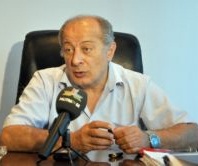 TBILISI, DFWatch – A Georgian bank affiliated with the largest opposition bloc has been fined with USD 11 609 500 by the National Enforcement Bureau.

The reason Cartu Bank, which is facing a series of problems after businessman Bidzina Ivanishvili decided to enter into politics, was fined, was that it did not grant USD 50 million in credit to certain companies.

The story began when a Tbilisi court fined Ivanishvili, the Georgian Dream coalition leader, with USD 45 million. The businessman said he would refuse to pay, and the National Enforcement Bureau started selling property it had seized from Ivanishvili, including a 100 percent share in Cartu Bank. However, no one purchased it at the auction. As a result, a temporary compulsory management was appointed at the bank. The director and the board council were fired.

Then Ivanishvili changed his mind and decided to pay the fine in order to help people affected by a hailstorm. The bank’s old management was restored, but when the bank’s director Nodar Javakhishvili came back to work he said that during the management’s absence, the temporary managers had signed contracts with four companies to give away credits amounting to USD 50 million. The bank doesn’t have that much money as a result of actions implemented against bank for the last nine years. The bank is on the edge of bankruptcy.

Recently, Nodar Javakhishvili held another press conference, at which he said that the bank was fined with nearly USD 11 million.

In this case, the fine was issued because of alleged non-fulfillment of a contract with a company called BETA Max Ltd. The bank should have given this company USD 10 million in credit, plus expenses for penalty, and an additional two percent of the money to be paid to creditor and 7 percent, which is the value of enforcement. In total this comes to USD 11 609 500.

The director of the bank believes this is another step by the government to drive the bank into bankruptcy.

Now, it has emerged that Cartu Bank was in negotiations with Beta Max to offer them credit for several months, and they have signed an agreement, but this is not a binding agreement.

“A general agreement is not an obligation. This is an agreement between parties, which would have become an obligation after defining certain points, but the temporary managers violated all points of the law and gave away credits with enslaving conditions.”

Yesterday, Beta Max Ltd responded to Nodar Javakhishvili, saying that the company went through all the proper steps with the bank to receive credit.

“There were negotiations with the bank for four months to sign this credit agreement,” Malkhaz Mirtskhulava, director of the company said at a press conference on Monday.

The process went through all the procedures – construction, legal, risks and safety expertises. Nine representatives of the credit department signed this document. It happened while Nodar Javakhishvili was director.”

He says that July 9, a general agreement was made and Javakhishvili also signed it. He also says that the Cartu Bank director thinks there is a political motivation behind the recent incident, as if this company wants to affect the bank.

Shortly after bank employees were given their jobs back, the court seized the accounts of Nodar Javakhishvili and seven employees of the bank, accusing them of illegally donating money to the Georgian Dream coalition. When the staff was reinstated, they received compensation for their time in absence and they decided to donate this money to Georgian Dream. These donations ranged from 100 to 17 000 lari.

According to new campaign finance legislation, a person is allowed to donate up to 60 000 lari to a “political subject” (either a party or an election bloc), but he or she should be able to prove that the money has a legal origin. Lawyers for the bank employees claim that the court didn’t take into account any of the evidence they presented that the money they donated was actually compensation which they had received after being temporarily fired.

The director of the bank says they will somehow manage to survive for a month and a half, meaning until the parliamentary elections on October 1.