Candidates for Tbilisi mayor face off in TV debate

Candidates for Tbilisi mayor face off in TV debate 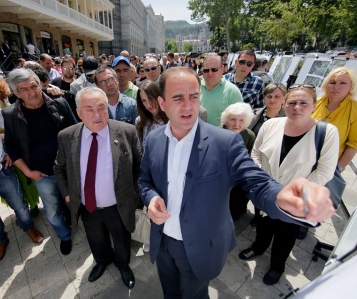 TBILISI, DFWatch–The candidates for Tbilisi mayor are facing off in a televised debate now at 8 PM local time.

Davit Narmania from the government coalition has as his main election promise to build a youth center in Tbilisi, while his competitor Nikanor Melia from the National Movement promises students paid internship at the City Hall if he is elected.

Only a few days are left until the second round of local election in Georgia, where most attention will inevitably be focused on the capital. Melia and Narmania continue their campaigns and are holding meetings with the population in different districts, as well as young people and students.

Narmania was minister of regional development and infrastructure until he had to resign to be mayor candidate. As minister, he was criticized and perceived as weak because not many infrastructure projects were implemented, while the budget of the minsitry wasn’t even fully spent last year.

Melia, who in the past used to be the governor of the Mtatsminda district in Tbilisi, is implicated in the case of bankrupting Cartu Bank, a bank affiliated with billionaire and former Prime Minister Bidzina Ivanishvili.

Melia was charged with abuse of power while he was head of Enforcement Agency, but he denied the charges. He was also charged with hooliganism after a late night brawl at a cafe in May, 2013.

Narmania told DF Watch that his decision to build a youth center was made out of concern for the interests of young people in Tbilisi.

He says that young people need supporting factors for self-realization and having a space where they will be able to hold meetings and conferences or other events.

Narmania also explains that it is planned to construct an educational center at one of the branches of Tbilisi State University, but this won’t be a university building and it won’t be only for students.

This will be a complex of three buildings with library, conference hall, working rooms and café, Tbilisi City Hall will be owning the complex and its administration subordinate to the Tbilisi government, but youth will be involved in management.

Narmania wants to hold a presentation of the project before the second round of the local election. He said it will cost several millions, but failed to put an exact price tag on this plan.

He assumes that it will need about two years to implement the project if he becomes mayor.

Earlier, Melia met with students who weren’t able to pay for their education due to difficult social condition and their status was suspended.

Melia promised them that if he is elected, there will be a project of paid internship for young people at Tbilisi City Hall.

He also promised to implement student employment project which will help them to work and study at the same time.

Melia said that his party has experience and a specific plan for how to improve economic growth and create jobs. He promised that there will be more advantages for students in public transport.

Tonight’s debate will be held at Sheraton Metechi Palace Hotel where there will be present journalists from different media outlets.