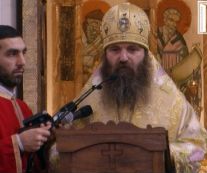 TBILISI, DFWatch–Is the National Movement a legitimate political party or an antidemocratic movement which leading figures in society have a duty to stand up against?

That is the essence of a controversy sparked by a bishop in the Georgian Orthodox Church.

As only a few days remain until the second round of local elections, Bishop Iakob warned Georgians against the National Movement, which under former President Mikheil Saakashvili’s leadership ran Georgia for almost a decade after coming to power in the 2003 the rose revolution, on the grounds that they have not accepted responsibility for their wrongdoings and still hold sway over the court system.

Georgia’s Central Election Commission (CEC) and a handful of non-governmental organizations (NGOs) attacked the bishop for the speech. They consider the National Movement a legitimate party which should be given full protection under election rules which prohibit religious leaders from agitating for or against one particular party ahead of an election.

In his Sunday sermon, the bishop criticized the court system and the National Movement after the Constitutional Court abolished a moratorium announced by the current government which prohibited foreigners from purchasing and owning agricultural land in Georgia.

He said that the duty of court is to define the truth, but instead makes decisions which are one-sided.

“Justice and court exist for us to listen to and if you follow the laws, you must enforce them too,” he said, adding that it is suspicious why this decision was made now, when the country has many other priorities and difficulties to overcome.

Moving on to the broader moral implications of the National Movement’s hard-handed rule, he pointed out that despite justice reforms that were aimed at establishing independent courts, ‘old staff’ remains within the courts.

Iakob noted that the new Georgian Dream coalition government, which came into power in 2012, has decided not to interfere in the activity of the courts and the courts are no longer blindly following every decision by the government unless they are properly justified.

“They wouldn’t dare to do so three or four years ago, as otherwise they would fill the prisons themselves,” he said, and continued saying, even though today’s government doesn’t interfere, no-one is so stupid as not to see that ‘they aren’t free of old influence.’

He addressed the courts, saying that due to their incorrect actions the country had more than 200 political prisoners.

As for the upcoming election he directly called for people not to vote for UNM. He called for the National Movement to ‘step aside’, saying that Georgian people rejected their violence and doesn’t want it back.

“When you don’t deserve being in power and God puts you aside, you must bow to others.”

“We all must go to the election and make a choice so that people who do not repent for what they’ve done to the country must be rejected.”

The CEC on Wednesday responded in a statement that it has begun an administrative investigation into the bishop’s speech and sent letter to him asking for an explanation.

During the last decade, the major NGOs have functioned like a shadow government, whipping up popular sentiments at important crossroads, mobilizing people on the streets, funding TV ads, influencing foreign diplomats, and tipping the balance of power. In 2012, they successfully campaigned to reform broadcasting rules, which led to a breakthrough for the Georgian Dream coalition in that year’s parliamentary election campaign.

The NGOs have recently come to see the conservative wing of the Orthodox Church, which has broad support in the population, as a disturbing element in Georgian politics, particularly in relation to its conservative views on gays, lesbians and other sexual minorities, and campaigned along EU policy lines when parliament discussed whether to include a clause explicitly offering protection against discrimination on the basis of sexual orientation – a condition by the EU for agreeing to a visa liberalization treaty.

“The norm of the Election Code strictly stipulating the prohibition of pre-election campaigning by certain subjects aims at protecting electoral process from the influence of religious figures, which is highly likely in Georgia considering the high public confidence and authority enjoyed by religious organizations,” the NGOs’ statement reads.

They call on the CEC to examine and take further actions in response to Iakob’s participation in the election campaign and, as they see it, violating election legislation.