Campaign event in Zugdidi goes ahead without violence

Campaign event in Zugdidi goes ahead without violence 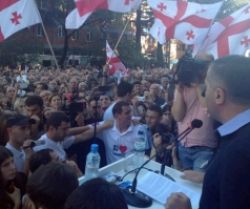 Unlike the events of July 20, there was no violence against UNM, but Transparency International observed members of the town assembly attending the Bakradze campaign event.

The demonstration against Bakradze was led by member of Defend Georgia Kakha Mikaia, and was attended by the trustee of the village Chkhori, Edem Kekutia, and senior specialist of Zugdidi city territorial unit, Nukri Jichonaia.

All of the people mentioned so far are public servants of the local government, who according to the electoral code are prohibited from participating in election campaigning during working hours. The Bakradze event started at 16:00, and since the demonstration took place during office hours, public servants were in violation of the election code, and could risk a 2 000 lari fine.

There was a heavy police presence checking whether people were carrying bottles or other objects which could be used for throwing. Those under influence of alcohol were not allowed to enter.

TI calls on public servants employed in local governmental bodies to avoid participation in political activities during working hours. The organization also underlined the fact that the police was effective in terms of preventing violence by ensuring a calm and secure campaign environment.