Campaign asks people to turn off mobile phones in protest

Campaign asks people to turn off mobile phones in protest 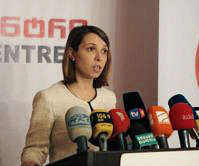 TBILISI, DFWatch–Several Georgian NGOs that are involved in the campaign ‘This Affects You Too-They Still Listen to Us’ call on citizens to turn off their mobile phones for two hours and protest against the government’s illegal wiretapping.

Nino Lomjaria, head of International Society For Fair Elections and Democracy (ISFED), said this is one of the activities that are planned in order to protest that the illegal wiretapping is continuing, but she said the NGOs are ready to meet the interior minister, which he has signaled that he is willing to.

‘This Affects You Too’, which includes several of the most influential NGOs in Tbilisi, began in 2011, when former President Saakashvili’s government started adopting laws that targetted a new opposition coalition started by the businessman Bidzina Ivanishvili, laws that were not in line with society’s interests and democratic principles.

Perhaps the most tangible results of the campaign was that people in the regions were able to watch all the TV channels that are broadcasting in Georgia.

After Ivanishvili formed a government the campaign continued and demanded that an archive of surveillance material created during Saakashvili was destroyed. Some of it was video clips shot with hidden camera showing people in private situations, including sexual acts.

The so-called dirty archive has now for the most part been destroyed, but the NGOs claim that illegal wiretapping is continuing and demand that the government cleans up. Therefore, the name of the campaign has been changed to  ‘This Affects You Too-They Still Listen to Us’.

In his answer, Interior Minister Aleksandre Chikaidze offered to meet and discuss the issue.

Eka Gigauri, head of Transparency International Georgia, Nino Lomjaria, head of ISFED, and Vakhushti Menabde, representative of Human Rights Education and Monitoring Center (EMC), said at a press conference that they are ready to meet Chikaidze. Tens of NGOs agree with the statement.

Gigauri said a new draft bill has been introduced in parliament that the campaigners support. Gigauri explained, this draft is in compliance with standards determined by the European Court of Human Rights.

Gigauri said that according to the draft bill, a judge’s permission is required to carry out covert eavesdropping, but the equipment that are installed in the offices of mobile operators is not being monitored, so the Interior Ministry can automatically obtain information without mobile operators being aware of it.

The NGOs demand concrete actions from the government.

“Mobile operators should allow covert wiretapping after permission by a judge. Also, it should be determined in what cases the government should listen to a person, and a group that should be wiretapped must be defined too,” Gigauri said.

Menabde said it is important for the government to realize that on the one hand, current practice should be changed, and on the other hand, legislative standards should be improved.