Calls for a truth and justice commission

Calls for a truth and justice commission 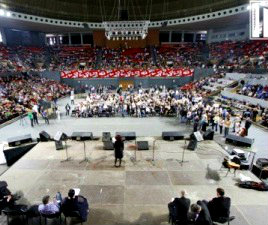 Victims and activists ask parliament to create a commission to study the crimes of the Saakashvili regime. (Interpressnews.)

TBILISI, DFWatch–Former political prisoners on Sunday held people’s congress at Sport’s Palace in Tbilisi in order to demand the restoration of justice and put the Saakashvili regime on trial.

The congress decided to set up a people’s movement with the same name: ‘Justice should be restored.’

During the congress, videos were showed of events of May 26, 2011, and November 7, 2007, when the governments of President Mikheil Saakashvili used force to disperse peaceful rallies.

“We are already studying certain cases,” he said. “Like the cases when a person has a certain status but the conviction wasn’t removed from their record. Many cases haven’t been published, many cases are top secret.”

The participants at the congress passed a resolution which asks the parliament of Georgia to set up a commission to investigate crimes committed during the previous government and give those crimes the appropriate legal, political and moral evaluation.

They also appeal to the international community to have a fair and objective position about the former government and the party of Saakashvili, the United National Movement.