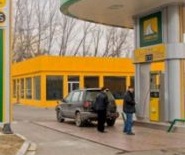 Gas station companies are among the backers of a new TV ad offering discount for people who vote. (Interpressnews.)

TBILISI, DFWatch–Several large companies in Georgia are offering discounts for customers who go and vote in the second round of local elections on Saturday.

A commercial appeared on television Thursday, placed by ‘businesses united for a common goal’. It calls on viewers to go and vote in Saturday’s election.

The voting procedure in Georgia involves marking one fingertip after having voted, in order to avoid election fraud, and the commercial says that if customer comes and shows a marked finger, they will get a special discount.

“Express your position, go and vote – business for civil society,” the commercial says.

Georgia held local elections on June 15, but many candidates failed to pass the threshold for winning an outright victory. Voters are therefore asked to come for a second round, which will be held on July 12.