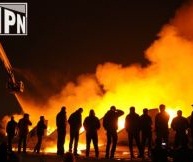 Firefighters have cut down trees to try to contain the fire. (Interpressnews.)

TBILISI, DFWatch–Firefighters are trying to contain a bushfire that is spreading in the Adjara region in south western Georgia on the Black Sea shores, bur wind is making their work is made difficult.

Journalists for the local newspaper Batumelebi and the news agency Interpressnews report that the fire covers the four municipalities Chaqvi, Khelvachauri, Gonio and Kobuleti.

Thickets and peas are burning in the villages of Gonio and Khelvachauri, while cornfields are on fire in Kobuleti. About 50 acres of land is burning in Chakvi. A tea plantation is burning in a village of Ochkhamuri near Kobuleti. The fire is mainly spread in unpopulated area. There are no reports of injuries.

The fire started in the second half of Friday. It is not known what caused it. Locals told journalists that fire fighters have started cutting down trees to try to contain the flames. There are fire trucks working in the most dangerous locations. Locals are also taking part by bringing water from the sea.

A tea plantation is burning in a village of Ochkhamuri, village near Kobuleti. Fire is mainly spread in unpopulated area.