Bus strike may be over Tuesday

Bus strike may be over Tuesday 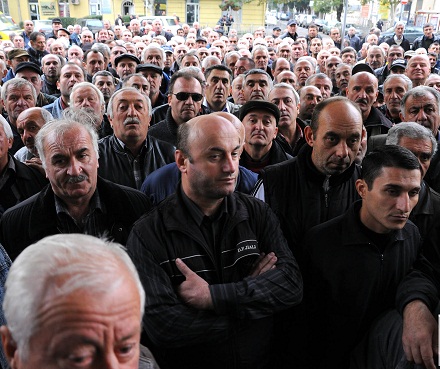 The yellow buses may return to the streets of Tbilisi Tuesday, as drivers agree to end their strike. (IPN.)

TBILISI, DFWatch — The bus strike in Tbilisi Monday appeared to be heading for a solution, as drivers promised to return to work Tuesday if a commission is formed to study their problems.

The conflict has lasted five days and encompassed more than 1300 drivers of Tbilisi’s yellow buses.

First they presented a list of 17 demands, which mainly included improvement working conditions and doubling of salaries. But later the driver changed their minds and expressed readiness to immediately stop their protest if the chair of Tbilisi City Hall’s transport service and the director of the transport company resigned, but this demand was rejected.

Meanwhile, drivers proposed their own candidates for these posts, as they consider they should be held by a person having relevant experience, a person familiar with the problems of their work and who will take care to solve them step by step.

But today, Soso Jachvliani, a member of parliament for Georgian Dream, met with drivers, who promised to go back to work from Tuesday morning. Jachvliani promised that a commission headed by Prime Minister Bidzina Ivanishvili will be set up to study the problems drivers are having.

The drivers maintain their demand about firing two officials at the transport system.

Tbilisi City Hall a few days ago published information about salaries of drivers, according to which their average salary is about USD 480. But drivers claim they also have to repair the buses and often are fined due to uncomfortable conditions in the capital.

Tbilisi Transport Company today made a short statement that the company will release of how much each driver has in salary in order to avoid misunderstanding. There will be indicated the name and surname of every driver, salary and amount of money they received due to fine or vehicle repairs.

The company also asked the Revenue Service to conduct an unscheduled audit, as there are too many unfair accusations in recent days.

Tbilisi Transport Company owns all bus parks of the capital. For five days no yellow buses were seen in Tbilisi, which has created serious problems for the population. There is a metro system, which costs the same as the bus, but doesn’t reach many districts, while the other option is to take minibus, which is expensive and discounts for socially vulnerable groups do not apply to them. In addition, the minibuses are crowded in the morning, when people go to work, school and university. Some citizens claim they haven’t been able to get to work these days due to the strike, while children had to walk to school despite the cold rainy weather.