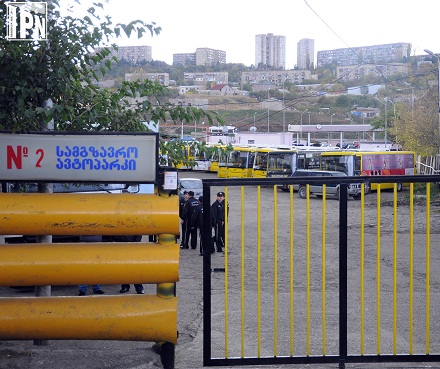 Bus drivers in Tbilisi are on strike for the fourth day. They might be joined by drivers of metro trains. (IPN.)

TBILISI, DFWatch — Sunday, Tbilisi bus drivers met representatives of city hall to try to solve the conflict which has brought bus transport to a standstill, but the meeting ended unsuccessfully.

All drivers of yellow buses in Tbilisi are on strike for the fourth day.

First they demanded increased salaries and better working conditions, but at today’s meeting they said they were ready to end the strike, and drop 16 of their demands, if only Akaki Jokhadze, head of Tbilisi Transport Service, and Levan Koplatadze, Tbilisi Transport Company, resign.

But city hall rejected this demand, even as drivers promised to go back to work immediately if it were.

Meanwhile, the population of Tbilisi are feeling the effects of the strike. Unable to go by bus, they reach for the alternatives, but the metro only reaches some of the city’s districts and minibuses are overcrowded and expensive.

About 1300 drivers are on strike demanding a doubling of their salary and improved working conditions. They also want new contracts which will guarantee their rights.

The transport company was ready to fulfill all of their demands except increasing salaries, as the company doesn’t have the money for this. Salaries for bus drivers were increased by 16 percent this summer.

Transport Trade Union representatives talk about a possible strike among metro drivers as a sign of solidarity with bus drivers.

Yesterday, Tbilisi City Hall in a statement apologized to citizens for the problems the strike is causing.

It says bus drivers work 12 days a month and earn USD 480 for small buses, and USD 540 for larger buses.

The City Hall statement says next year’s budget will define whether salaries will increase from next year, but within the frames of the 2012 budget, raising salaries is impossible. As for the demand about firing the heads of the transport company and the transport service, this is described as having political motivation, and affecting Tbilisians.

As the strike continues, Tbilisi is still without its characteristic yellow buses.