Bus drivers on strike in Tbilisi

Bus drivers on strike in Tbilisi 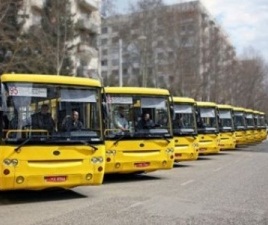 The drivers of Tbilisi's yellow buses are on strike. (IPN.)

TBILISI, DFWatch — Drivers of the capital’s yellow buses have joined a wave of strikes that has rocked Georgia since the election.

Since Thursday morning they have refused to go to work as normal but protest in order to improve their work conditions and increase their salaries.

There are three auto-parks for buses in the capital, and all are on strike uniting more than 1 300 drivers, who stand by a declaration containing 17 demands.

None of the yellow buses were in service from morning, creating problems for the population, especially those living in the suburbs.

Still, this was only a warning strike, but drivers say if their demands aren’t met they will move on to a much larger scale protest. They claim they won’t give up before an agreement with management is achieved.

People complain of being late for work, school and university, about the crowded subway and minibuses.

The drivers’ main demands are better work conditions and increased salaries, but the drivers also demand to be compensated for work they did during the war in August 2008, when Tbilisi’s city buses were deployed in the war effort to bring soldiers around; and to put in order the last stops in regard to hygiene.

Tbilisi Transport Company claims it is impossible to double the drivers’ salaries as the company can’t afford it.

A driver, according to him, has a salary of about USD 500 on average, depending on the length of the working day and the route.

The director expressed readiness to answer the drivers’ questions and hope that bus service will be restored in the capital.

Yesterday, different groups of workers from metallurgic, Ferro alloying plant and mine workers held a rally at the parliament building in Kutaisi in western Georgia, demanding to amend the labor code, which doesn’t give any rights to workers, but gives rights to employers.

Employees of Energy Company Telasi also went on strike. Their main demand was to fire the commercial director of the company, who has resigned, but workers claim that the former director’s team is still on their posts.

About 300 workers are on strike right now. Among their demands is to that 125 who were fired get their jobs back.

There are talks and discussions that all those strikes and protests all over Georgia, including tension at prisons, is an attempt of sabotage organized against the new government, but no official comments have yet been made.

Georgia is hit by wave of people sewing their mouths shut and going on hunger strike, refugees and socially vulnerable people breaking into empty buildings demanding to be given a place to live, disorder in several prisons and numerous strikes in different parts of the country.

Two days ago, miners in the coal town Tkibuli went on strike. About 1 200 workers at Saknakhshiri protest outside the administrative building demanding to increase their salaries by 60 percent and have holidays on the days defined by the constitution.

“We demand to have salaries what we used to have before the election. Our administration decreased our salaries after the election on purpose so we would blame it on Georgian Dream, but it is not so. We support Bidzina Ivanishvili,” local media quotes one of the workers Davit Janelidze.