Bus drivers on strike in Batumi

Bus drivers on strike in Batumi 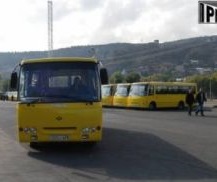 Municipal bus drivers in Batumi have been on strike for five days. (Interpressnews.)

TBILISI, DFWatch–Bus drivers in Batumi have been on strike for five days, demanding higher salary and the dismissal of the director of Batumi Autotransport Ltd.

Two of the protesting drivers, Nugzar Gvianidze and Nika Sikharulidze, are on hunger strike and live in tents outside the entrance of the company’s garage.

“We brought blankets yesterday and stayed here despite the bad weather,” they told Interpressnews on Sunday, and warned that the strike will not be called off until the director resigns or is dismissed.

The reason why they want to dismiss the director is that he didn’t follow through on an agreement from a year ago that the company would sign a collective contract with the drivers and increase their salary.

Buses are standing still in the Black Sea resort due to the strike. About 300 drivers are part of the protest.

Batumi Autotransport Ltd has employed more minibuses to serve passengers until the strike is over.