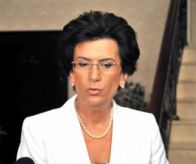 Burjanadze explained that the program contains all important areas for the country’s development, and foreign and domestic affairs.

She admitted the program was presented a bit late, but explained that it was necessary to meet with the population first in order to listen to the views of all the people she met during the campaign.

Burjanadze promises to provide citizens with domestic and outside security, along with creating the conditions for ‘universal welfare.’ She says that her goal will be to make Georgia a subject in the international system, instead of being an object, and using preventive diplomacy as the main approach in the security policy.

One of the major issues in her program is restoration Georgia’s territorial integrity. “I will start large-scale negotiations with Russia, including on the most painful topics, as our country’s territorial integrity and the removal of troops from Georgian territory,” Burjanadze said, adding that the dialogue with Abkhazians and Ossetians is important and Russia must play a positive role in regulating the conflicts with them.

In terms of relations with Russia, Burjanadze believes that relations must be normalized as much as possible to assure Russia that Georgia is not an enemy. She also said that her goal is to deepen relations with the EU and have equal cooperation with NATO, by which she meant cooperation what isn’t directed against the ‘legitimate interests of third countries.’

Other issues in the program are providing security, protecting national values, creating conditions for proper living conditions and upholding justice.

When it comes to the war with Russia in 2008, Burjanadze demands punishment for what she calls the ‘creators’ of the 2008 war.

After finishing her presentation, she said that many experts evaluated her program very positively. She thinks Georgian Dream candidate Giorgi Margvelashvili is her major competitor and challenged him for debates. Margvelashvili has not yet responded.