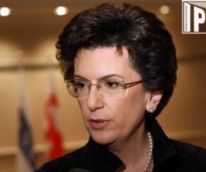 TBILISI, DFWatch–The State Audit Office in Georgia has fined the party led by opposition figure Nino Burjanadze, Democratic Movement, 65 000 lari (USD 36 600) for not declaring its finances in the election campaign.

The State Audit Office, previously known as the Chamber of Control, is a body authorized to monitor the financing of political parties, as well as political subjects, legal persons or individuals who have some connection to politicians.

The SAO’s was given increased power by Mikheil Saakashvili’s government in the end of 2011, after Bidzina Ivanishvili went into politics. During about a year, the office fined many Georgian Dream coalition members, including Ivanishvili, who founded it.

Friday, SAO published a statement saying that it is going to court against several political subjects and parties because they didn’t disclose their financing during the campaign for the presidential election. The biggest fine was issued to Burjanadze’s party.

The office also sues Kartlos Gharibashvili, who participated in the election and was presented by an initiative group. He is required to pay a 1 000 lari (USD 600) fine for not declaring three weeks of financing.

Mamuka Melikshvili and Nestan Kirtadze, who also participated in the election from initiative groups and didn’t declare their financing for three weeks, will also have to pay USD 600.

SAO issed a 2 000 lari fine to the National Movement for not sending its financing documentation regarding election commercials.

Burjanadze’s Democratic Movement didn’t declare information about donations during the campaign. The amount of donations was 32 318 lari and by law the party will be fined twice as much as the amount of the donations.