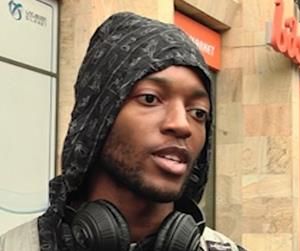 British dancer Aaron Shikamaru Charles says he is being repeatedly harassed because of the color of his skin in Tbilisi.

TBILISI, DFWatch–A British citizen says he has been subjected to racial discrimination in Tbilisi.

Dancer Aaron Shikamaru Charles has lived in Georgia for two years. His wife, Nutsa Eristavi, is Georgian and the artist couple carry out joint projects here.

Aaron says people talk about him, point their finger, laugh or stare at him, but the most disturbing incidents occurred a few weeks ago.

Eristavi explained: “Before going to the cinema, Aaron and me, as usual decided to have a lunch at the supermarket Smart. Unexpectedly, a middle aged Georgian approached, looked at Aaron with hate and then asked me why a beautiful girl like me was sitting next to this monkey.”

The couple say they were humiliated and disturbed, as the stranger swore and the guard did not react.

A few days after the incident, Aaron was sitting with his students at McDonald’s when two men demanded that he leave the building. They asked whether he was from Africa, whether a free person  and who his owner was. After the situation became tense, the guard at McDonald’s took Aaron outside. The management called the security police and the people who insulted him had to apologize, but were still allowed to stay at the restaurant, while Aaron was made to leave.

Tako Gegelia, a lawyer at Human Rights Education and Monitoring Center, thinks there are indications that racial discrimination took place in these incidents.

However, Aaron does not plan to file a complaint with the police; he says he wants to have a positive approach to what happened and calls on people to accept diversity and get an education.