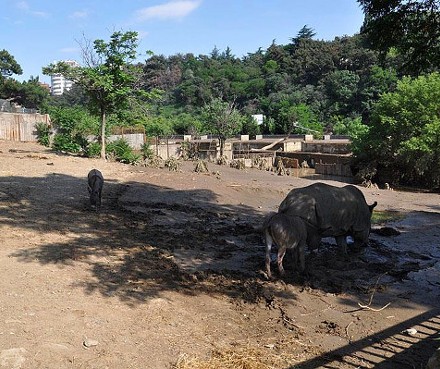 The flood took the lives of at least 19 people and many animals in a zoo. (DF Watch.)

TBILISI, DFWatch–Placebo, a British band which recently played at Tbilisi Open Air festival, has donated about USD 40,000 to the victims of the flood on June 13-14.

The website Indiegogo, which raises funds for charity, said it had received USD 39,974 from Placebo to help Tbilisi recover from the flood.

A few days after the flood, Placebo’s Stefan Osdal posted a photo of a hippo which escaped the zoo on the night of the flood and wandered the streets of Tbilisi. The hippo made the front pages worldwide, and while the subject of many jokes, some also used it as a PR tool to raise funds, drawing comparison to the situation in the well-known animated film Madagascar.

Osdal wrote that when he saw the picture from the streets of Tbilisi, where Placebo was going to perform a few weeks later, he couldn’t wait to ‘join the circus.’

This post caused outrage among the band’s Georgian fans, who started commenting everywhere in social media and on Placebo’s official pages, protesting what he said.

As a result, he deleted the photo and wrote a note of apology.

“I never intended this to be the case, and I genuinely did not realize the true effects of what had happened. I have been looking forward to playing to our fans there and the last thing I wanted to do was to make them angry and resentful. I sincerely do hope the city can get back on its feet very soon and that no more casualties occur,” he explained.

At a press conference before their performance in Tbilisi, band members said they were going to transfer all of their income from this performance to the victims of the flood.

The Tbilisi flood resulted in at least 19 deaths. Three people have not yet been found. The damage caused by the disaster amounts to about two hundred million laris. Many people lost their houses. Infrastructure was also badly damaged. Many zoo animals and other animals died.