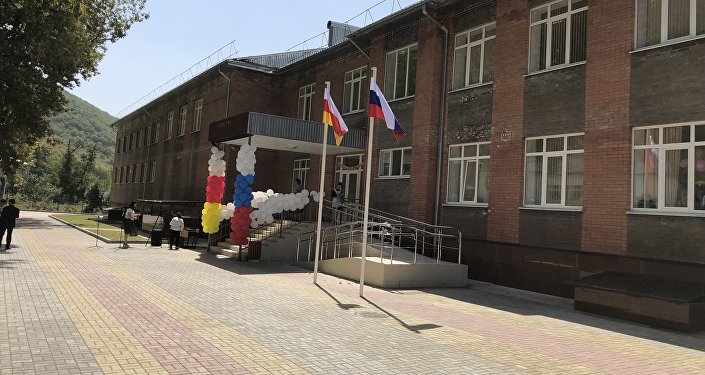 A public school in the town of Akhalgori. (DFWatch.)

AKHALGORI, DFWatch–Tskhinvali plans to close some of its public schools from due to lack of pupils. The list includes two Georgian schools.

Also a small school in the village of Abrevi will be closed. The breakaway authorities say only two pupils are attending classes at the school, which is located in Akhalgori.

It is not yet clear whether the school closures are part of a policy of Russification, which is been stepped up in the last two years and is targeted at ethnic Georgians living in the breakaway republic.

In May, 2018, Tskhinvali closed the sole Georgian kindergarten in Akhalgori, despite the fact that ethnic Georgians compose over 55 percent of the district’s population. Since then, it has been renovated and turned into a Russian-only kindergarten. All Georgian-speaking staff have been fired and replaced by ethnic Ossetians. Even the cooks and guards were dismissed because of poor knowledge of Ossetian language.

In addition, the remaining six Georgian schools in Akhalgori district have been compulsorily turned half Russian, and teaching in Georgian is banned up to 5th grade. Georgian children in the first grade who do not know any Russian are using textbooks in Russian; a language they can barely understand. Georgian is taught as a foreign language.

In response to the decision by breakaway authorities, the Government of Georgia has developed a new program to support students living in the occupied regions. The program is designed to help them enrol at Tbilisi universities. The program was prepared within the framework of the Peace Plan “A Step for a Better Future” and is implemented by the Office of the State Minister for Reconciliation and Civic Equality and the Ministry of Education.

The new program includes a one-year preparatory course for students from the occupied territories, which will assist with passing the exams needed to register at universities in Georgia proper. Tbilisi State University and Zugdidi State University will hold these courses.