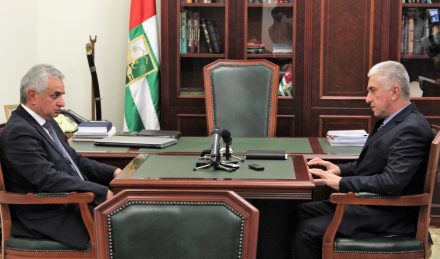 GALI, DFWatch–Breakaway authorities in Sokhumi plan to invite ethnic Abkhazians in the Middle East to come and settle in the southern Gali and northern Gagra districts.

The scheme will shift the demographics in parts of the disputed territory where the Abkhazians are not the prevalent ethnicity.

This will diminish the share of ‘representatives of other nationalities’ near the ‘borders’, the de facto minister of repatriation Beslan Dbar said.

According to him, about 130 people living in Jordan have already expressed their desire to return to their historical homeland.

“130 representatives of the Abkhaz diaspora in Jordan want to return to their historical homeland. People aged between 35 and 50 years want to return to Abkhazia, while their parents remain due to their age,” Dbar said, stressing that these people don’t need assistance from the special fund which supports repatriation.

He also mentioned Syria and Turkey as places where Abkhazians might be invited to return to their roots and settle in the northern or southern end of this territory, where mostly other ethnicities than Abkhaz are living.

“Gali and Gagra are the gateway to our republic. In both of this districts predominantly live people of different ethnicities. Abkhazians should live there and welcome visitors (in Abkhazian),” Dbar said.

Beslan Dbar visited Gali couple days ago, where he met with the head of de facto administration. Discussions focused on the settlement of repatriates of Jordan, Turkey and Syria in the Gali district. He did not specify when the resettlement will take place, but later told Russian media that settlers from Jordan will be provided with accommodation by the end of summer.

Sokhumi established a state committee for repatriation back in March 1993. In 1998, a fund was established to support repatriation programs, and legislation was introduced which offers those who qualify a status as repatriate for 5 years.

Chairman of the committee Eric Kutarba said up to 11,000 compatriots have already received Abkhazian citizenship and more than 4,500 have returned to Abkhazia. He also stressed that the fertility rate among repatriates is significantly higher.