Bokeria pointing at government for attacks on opposition

Bokeria pointing at government for attacks on opposition 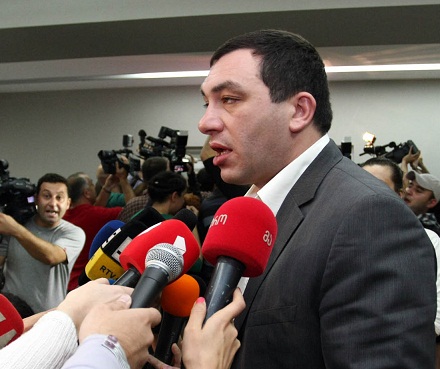 Giga Bokeria says the police reaction to the violence in western Georgia was inadequate. (IPN.)

Tbilisi, DFWatch – The interagency commission for free and fair election expresses concern about incidents, which took place this Saturday and Sunday during United National Movement’s primary election conferences in Batumi and Zugdidi, Western Georgia, where people threw eggs and bottles at UNM members.

The interagency commission is now a subordinate body to the Security Council of Georgia and the chairman is Giga Bokeria, who is also Secretary of the Council. On Tuesday he issued a statement expressing concern about incident and ‘the inadequate reaction of the police.’

Bokeria thinks that the violent incidents are not compatible with the statements of Prime Minister, who promises a free and fair presidential election on October 27. The commission is concerned that even though in both locations there was a police presence, they failed to prevent a physical confrontation.

12 persons were detained on Saturday and two on Sunday and all were released for GEL 100 (USD 60) fine.

Bokeria thinks this is not adequate punishment for the actions, and this may be taken as encouragement to violence.

“Also on the background of events when we witnessed fining students with USD 600 for peaceful protests,” he says adding that in order to prevent violence on political motives, it is important to have criminal persecution or administrative detentions in the future.

“Even more when there is suspicion that this rally was organized by the separate representatives of the government,” he added.

Bokeria remembered pre-electoral process before parliamentary election in 2012, when incidents like this took place and he drew attention to how the court used administrative detentions as punishment instead of fine.

During the campaign period for the parliamentary election the interagency commission informed police about rallies planned by the opposition, which gave an opportunity to prevent incidents, he said.

Thea Tsulukiani, Minister of Justice, on Tuesday denied any involvement of the government in Zugdidi and Batumi violence.

“The shameful incidents we witnessed in Zugdidi and other regions must immediately end,” she said. “New government has nothing to do with throwing stones. In democratic society any party, including parliamentary opposition, must be able to meet with supporters in free environment without anyone throwing stones to them.”