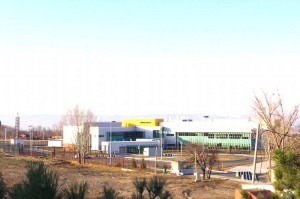 The Central Public Health Reference Laboratory is a joint American-Georgian cooperation, and the construction of it has been led by the Defense Threat Reduction Agency, a branch of the U.S. Department of Defense.

Research there will begin in the near future, according to a statement by Saakashvili’s administration after the meeting, which took place at the president’s offices.

According to the president’s administration, the main topic of the meeting was deepening relation and cooperation between Georgia and the U.S.

Research at the CPHRL will be overseen by a board of governors, including representatives of the Georgian and the U.S. governments as well as international organizations. Director is Anna Zhvania, former Georgian intelligence chief.

Tuesday’s statement from the Georgian president’s administration says that the lab also will have American military researchers working there.

In the beginning, the project was the responsibility of the Georgian Ministry of Defense. Later, responsibility was handed over to the Health Ministry, reflecting the stated civilian purpose of it, as a way of filling in gaps in the international warning system for dangerous epidemic outbreaks.

There have been concern among the local population that it would be used for weapons purposes, and in 2004 there was a protest demonstration organized by the Green Party.

At the opening ceremony March 18 2011, officials made it clear that the lab will not be used for research on biological weapons.