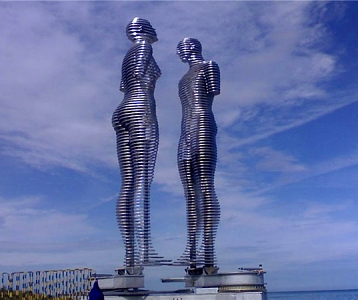 TBILISI, DFWatch–A seven meter tall steel statue which is one of the coastal city’s most important tourist attractions was damaged while being moved.

The Nino and Ali statue stands on the seafront and portrays a man and a woman. It is lit up by colored lights at night and the two move close to each other merging into one piece every 10 minutes.

It was installed in the summer of 2011 and is designed by Tamar Kvesitadze, but now the boulevard administration in Batumi decided to move it, and during the moving process the Nino sculpture fell down and was damaged.

Director of the boulevard administration Giorgi Zirakashvili said that the sculpture has minor damage and will be repaired in about one week after which ‘everything will be fine.’ He added that a cable broke during transportation and two or three wings of the sculpture were damaged.

Zirakashvili said the sculpture had to be moved so the seafront can be reinforced. This was the conclusion of an expert report. He explained that the base of the sculpture was damaged during a storm.

‘Nino and Ali’ will be installed by September 5 at a location 50 meters away from where it was.