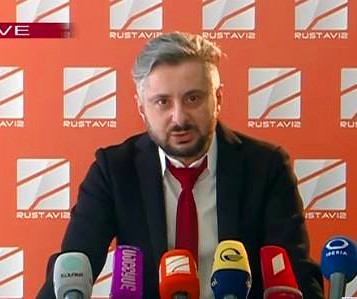 Nika Gvaramia, director of Rustavi 2, the pro-Saakashvili television channel on which the unproven accusations were given extensive air time.

TBILISI, DFWatch–A fiercely anti-government TV station in Georgia aired allegations against a former high-level prosecutor purporting that he had tried to sell a secret recordings of a former prime minister and billionaire.

The word fight was launched during a live TV debate on Rustavi 2, a popular anti-government channel.

Ex-prosecutor Davit Sakvarelidze claimed during the program Archevani (“Choice”) that another former chief prosecutor had tried to sell a secret audio recording of Bidzina Ivanishvili, the billionaire and philanthropist who created the ruling Georgian Dream movement and served as prime minister for its first year in government.

The content of the recording, whose existence is unverified, was left hanging in the air, unspecified, amplifying the mystery. Sakvarelidze claimed his successor as deputy prosecutor had asked unspecified political opponents ‘several millions of dollars’ for it.

Sakvarelidze was calling in from Ukraine, where he has been serving in the same capacity as home – deputy chief prosecutor – after fleeing his native Georgia after the UNM party’s surprise defeat in the 2012 parliamentary election.

Sakvarelidze has appeared sporadically in international media defending the actions of his former boss, Mikheil Saakashvili, who also made a new career in Ukraine with the Maidan revolution, serving for a year and a half as Odessa governor. Like the ex-president, Sakvarelidze would face legal prosecution should he venture to return to his home country.

But Lasha Natsvlishvili, the target of the new claim, flatly rejected that he had tried to sell any such recording.

“Falsehood and violence have been and remain a trademark of the United National Movement, the only weapons left from their political arsenal are mudslinging and moral terror,” Natsvlishvili wrote on Facebook.

Natsvlishvili served as a deputy to the minister of state security in 2001-03, during Eduard Shevardnadze presidency. He was appointed deputy chief prosecutor after Ivanishvili’s Georgian Dream coalition won the 2012 parliamentary elections and thus put an end to Saakashvili’s rule.

“How can you comment on misery delirium? It is not only insulting, but also counterproductive in terms of medicine,” the former deputy chief prosecutor wrote.

This edition of Archevani also featured the TV company’s top director, who claimed to be the secret friend Natsvlishvili allegedly had contacted to make the deal, seemingly wrapping up the case.

Rustavi 2 director Nika Gvaramia, a former Justice Minister and Minister of Education, backed up the claim by alleging that he was the secret friend who was offered to buy the recording but turned down the offer.

“I told him I had no money. He asked me to connect him with one of the leaders of UNM living in Kiev. One of them was Davit Sakvarelidze,” Gvaramia said.

Gvaramia claimed that at the time he made the offer, Natsvlishvili had been fired from his position as deputy chief prosecutor and held a grudge against the government. He also accused Natsvlishvili of being a drug addict.

“Law enforcement agencies know the materials include secret wiretapping recordings, and they are being kept secretly in Yerevan at one of his friend’s place,” Gvaramia alleged. Before assuming the helm of the strongly pro-Saakashvili outlet in November 2012, he was justice minister during the Saakashvili presidency.

Rustavi 2 is known for its sensationalist reports and was criticized in a United Nations report for broadcasting incorrect news reports which had a destabilizing effect on the security situation in the border area.