Barroso: Georgia doesn’t have to choose between East and West

Barroso: Georgia doesn’t have to choose between East and West 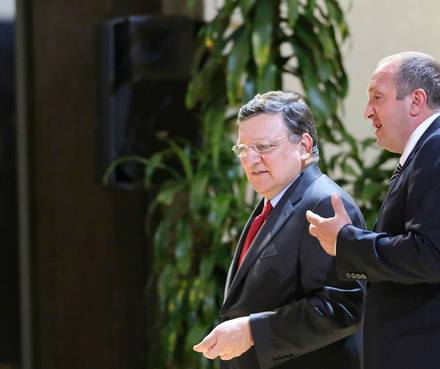 Barroso said the Association Agreement Georgia is to sign on June 27 is not ‘exclusive’, and the country can have the same kind of relations with other states, apparently a reference to the Eurasion Union – a Russia-dominated free trade bloc comprising former Soviet countries.

This apparently contradicts the stance of some European countries that a free trade agreement with the EU excludes membership in the Eurasian Union.

He also said that he hopes Russian President Vladimir Putin will fulfill his promise not to take negative steps in response to Georgia signing the EU treaty.

He said Georgia is an independent and sovereign country with the right to make its own decisions and enter into treaties if it so desires.

Barroso continued saying that there is a relation between Georgia and Russia, and the EU is not against Georgia having the same type of relations with other states as with the EU.

“We are on your side. We stand beside a democratic, prosperous and united Georgia,” he said at a joint press conference after meeting with Georgian President Giorgi Margvelashvili.

He said Georgia is seen as a member of the European family and his visit to Georgia was a means of confirming this once again.

“I am convinced that the best way to make your country flourish is first of all, the continuation of reforms as well as the association agreement,” the EU Commission president said.

Barroso added that Georgia has carried out important reforms and it is necessary to continue reforms in the future because it is important for Georgia to stay committed to the independence of the media and the courts – and political pluralism.

On Friday, he met with Prime Minister Irakli Gharibashvili and took part at the opening of a business forum. Barroso will leave Georgia for Azerbaijan on Friday.