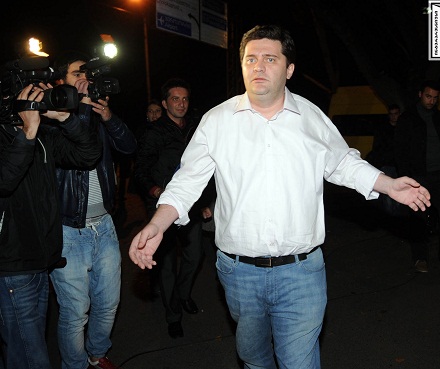 Bacho Akhalaia on the day of his detention, November 7, 2012. (Interpressnews.)

TBILISI, DFWatch–Former interior minister and close Saakashvili ally Bacho Akhalaia has been moved from a relatively privileged facility to Prison No 8 in north Tbilisi, notorious for numerous cases of torture and death.

Akhalaia, who has been in detention since November, has at different times been prison, defense and interior minister. He is facing five charges in cases about exceeding powers, abuse of powers, illegal deprivation of liberty and torture.

After the National Movement Party was defeated in the October, 2012 parliamentary election, Akhalaia left Georgia like many of President Saakashvili’s closest companions. When he returned on November 7, he was immediately detained, together with several former military officials.

After briefly being held at Gldani Prison, he was placed in a cell in the so-called Matrosov Prison, where conditions are thought to be safer and is the usual place to hold former government officials. At the time, Justice Minister Tea Tsulukiani told Maestro TV that the ex minister had received death threats from several inmates at Gldani and that was the reason he was moved.

Today, Akhalaia’s lawyer informed that his client has been moved back to Gldani Prison. The so-called Prison Number 8 is where the majority of the prisoner abuse cases were filmed which caused a public outcry before the election last year.

Newly appointed prison minister Sozar Subari explained that the reason Akhalaia has been moved is that there has begun rehabilitation work at Matrosov Prison. He ‘will be safer’ in Prison No 8, the minister claimed.

“There were such conditions at the so-called Matrosov’s prison, which do not accord to the image of the country,” he said during a visit to Telavi on Monday.

375 prisoners were distributed to different prisons together with Akhalaia.

The leaked videos published by a former prison guard at Gldani Prison proved what most Georgians had been aware of for years, while they sought help from foreign experts and diplomats but were mostly ignored.

But when the scandal broke, international media attention due to the election made it impossible for the Saakashvili government to ignore the protests as had often been done in the past. Bacho Akhalaia resigned, as did the prison minister, Khatuna Kalmakhelidze, who had played the role as the human face of the prison reforms while the former is accused by many prisoners and their relatives of having ordered the torture and by some accounts personally participating in it.