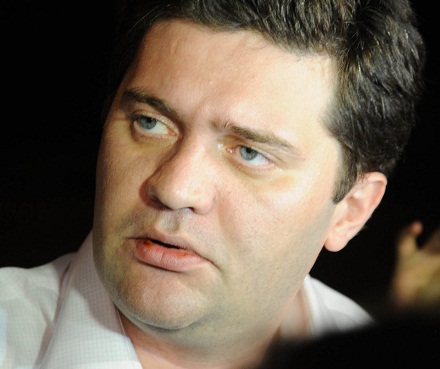 Bacho Akhalaia was acquitted in yet another trial, but remains in detention pending another court case. (Interpressnews.)

TBILISI, DFWatch–The Appeals Court in Georgia has acquitted former Defense Minister Bacho Akhalaia, but sentenced the others who were charged in the same case to 3 years and nine months in jail.

Bacho Akhalaia, Giorgi Kalandadze, former head of Joint Staff and Zurab Shamatava, former Commander of the Fourth Brigade, were charged with illegal deprivation of liberty and physical abuse of soldiers.

The abuse took place in October 2011, while Akhalaia was defense minister. The Prosecutor’s Office claimed that the three officials physically and verbally abused six soldiers at the ministry building and then took them to Vaziani military base outside of Tbilisi and continued to verbally and physically abuse them.

In summer 2013, Tbilisi City Court acquitted all of the accused.

The Prosecutor’s Office appealed the decision. Zurab Shamatava and Alexandre Gorgodze were sentenced to five years in jail, but due to a mass amnesty introduced earlier in 2012, their sentences were reduced to three years and nine months.

The two were detained inside the court room. They will be prohibited from holding an official post for nine months.

Giorgi Kalandadze, former Head of the Joint Staff is prohibited from holding an official post for three months.

The other officials who were charged, Merab Kikabidze, Gaga Mkurnalidze, Manuchar Daraselia and Giorgi Kintsurashvili, were also acquitted by the Appeals Court.

The Appeals Court’s decision may be appealed to the Supreme Court within a month.

Bacho Akhalaia was convicted in another case regarding a prison riot in 2006, but pardoned by outgoing president Mikheil Saakashvili. He remains in pre-trial detention for new charges which concern the murder of Sandro Girgvliani.