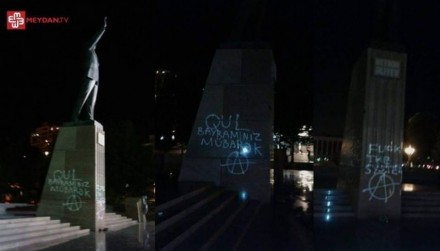 Photo: Graffiti at the Alyev’s statue were erased and round-the-clock police put on duty at the monument. (Meydan.tv)

Tbilisi, DFWatch – On evening of May 10 two activists disappeared in Baku, Meydan TV reported. Then on May 12, the Khatai District Court placed Bayram Mammadov and Qiyas Ibrahimov under a four-month arrest for drug-related charges.

The detention was precede by the two drew political graffiti on a statue of the late Heydar Aliyev, former president of Azerbaijan, in Baku center.

May 10 is birthday of Heydar Aliyev, the father of Azerbaijan’s current president, Ilham Aliyev. This day is marked as Flower Day across the country in commemoration to the former president.

Later all graffiti were erased and round-the-clock police put on duty at the monument.

The activists face up to 12 years in jail.

On May 16, their lawyer Elchin Sadigov posted on his official Facebook account a letter of Bayram Mammadov, in which he described torture and humiliation to which he had been subjected in custody.

“On 10 May 2016, around 14-15 pm, three people in civilian clothes forced me to get into a white SUV and took to 12th Police Station. They brought me to the chief’s office. There were 7-8 officers in civilian clothes. They immediately began to punch, slap and kick me…

“They brought me to Baku City Police Center by car. I was beaten again and told to confess in the drug possessing/trading. I told that I’d never seen drugs in my life and they couldn’t arrest me for taking a photo. They beat me harder, demanding to accept charges, were cursing and insulting me.

“They took my pants off and threatened to use a baton ‘immorally’ on me. That’s why I had to ‘confess’… Then they brought me to a general’s office and told me if I… would apologize, they would release me. I declined, and they beat me again.

“They brought me to Narimanov temporary detention center. On 11 May morning, the chief officer ordered me to clean the yard, pick up the cigarette butts. I refused and he started to beat me. I refused again and he (threatened me) by ordering his men to pick up a baton and force it into me and then took photo. I had to agree again. They gave me a broom and a dustpan and  took my photo. These beatings began to happen daily.

“After a court hearing on 12 May, they took me to chief’s office. There were two people in civilian clothes, They told me to write several names, perjuring them of working with me, proposing to lay flowers in front of the statue [of Alyev] and talk to AzTV,  and they would release me. I declined again and they phoned someone and said  to ‘take care of him for a while’. They took me to lower floors. I was handcuffed and they were beating me with punches, kicks and batons. They even shackled my feet and taped my mouth so no one would hear me screaming.

“Seeing that handcuffs and shackles left bruises, they taped my hands and legs to my back,  put me on the ground. One of them was holding me while the other one was beating my bare foot sole, picking me up and sharply dropping. After four or five times, I was untied and they started to stomp on my hands.  One man was still kicking me. Then they hit my chest and knees with a baton. I was losing conscience and they stopped. They were tired, too. They tied a piece of paper on me and told that if they see it falling off, they would beat me again, what they did later.

“After a while, they demanded me to clean a toilet. When I declined, they started beating me harder, and filming with a camera. I lost consciousness. They woke me up by pouring water and took to my cell barefooted.

“Right now I have many bruises on my arms, legs and knees because of torture. Open wounds are on my hands and wrist. I still suffer from pain in my head, from open wounds on legs. My urine is mostly bloody. I have pain when eating. My chest, ribs, arms, legs… every part hurts.”