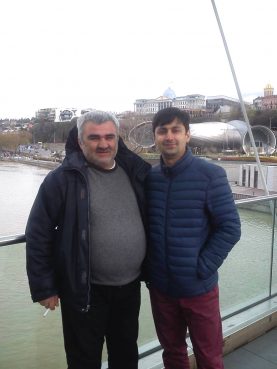 Kamran Mahmudov (right) pictured next to his Azerbaijani colleague Afgan Mukhtarli, whose abduction in Tbilisi in May caused a public outcry in Georgia. (Facebook.)

TBILISI, DFWatch–A journalist at Radio Free Europe’s now closed office in Azerbaijan was detained on Thursday and told that he cannot leave the country.

Kamran Mahmudov, a former producer for RFE/RL, was detained at the border on the way into Georgia and taken to the police station in the nearby city of Gazakh. He was released after a few hours but told that he cannot leave Azerbaijan.

The journalist was not subject to a search, Azerbaijani police said to Kavkaz-Uzel, but was on the list of persons who are not allowed to leave the country.

In the past, Makhmudov worked for Radio Liberty’s Azerbaijani office. After it was forced to close by authorities in 2014, he worked for some time at the Internet TV Kanal-13. Recently, he collaborated with independent Internet TV Toplum.tv.

Khadija Ismayil, an Azerbaijani investigative journalist who currently works with Organized Crime and Corruption Reporting Project, wrote on her Facebook page that the only reason for why Mahmudov’s arrest was his work as a journalist and government critic.

“He is an outspoken journalist. Otherwise, there is no reason for his arrest,” Ismayil wrote.

She described working together with Makhmudov for Radio Free Europe / Radio Liberty.

“We worked togetherfor several years in After Work, a radio show on RFE/RL Azerbaijani. I was editor/presenter, he was producer/presenter. After the closure of Radio Free Europe’s Baku studio, Kamran was running a one-man-show on different platforms, interviewing people about current affairs.”

Earlier, in May, it sparked outrage that another Azerbaijani journalist, Afgan Mukhtarli, was abducted by unknown men in Tbilisi and later turned up in Azerbaijan.