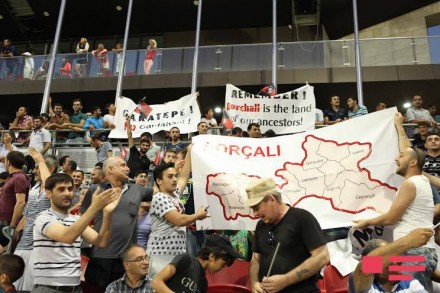 TBILISI, DFWatch–Azerbaijani football supporters took revenge against their Georgian counterparts on Wednesday by holding a poster with a subtle political message during a match in Gabala.

A few days ago, Georgian supporters trampled on an Azerbaijanian flag and held up a poster with a map that showed two regions of Azerbaijan which belonged to Georgia in the past. https://dfwatch.net/georgian-football-fans-accused-of-trampling-on-azerbaijani-flag-36961 National chauvinism has been a feature among Georgian football fans for many years.

During the match in Gabala on Wednesday, Azerbaijani fans showed a posters displaying a map showing Marneuli as a part of Azerbaijan. Police later seized those posters from them.

Marneuli is a town in south Georgia close to the capital, inhabited mostly by ethnic Azerbaijanis.

Ambassador of Georgia to Azerbaijan told Rustavi 2 that it was a provocation and a respond to what recently happened in Tbilisi. He said the embassy appealed to law enforcement bodies to investigate the case.

FC Club Dinamo plans to appeal to UEFA about the incident in Gabala.