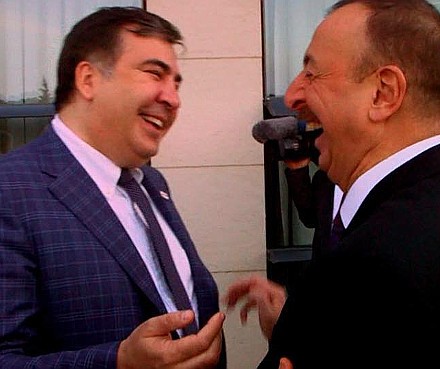 TBILISI, DFWatch–The government in Georgia has asked Azerbaijan to detain ex-President Mikheil Saakashvili during a visit to the neighbor country.

Saakashvili has had a meeting with the president of Azerbaijan, Ilham Aliyev. According to local media, Azerbaijan’s government rejected Georgia’s request.

Saakashvili visited Azerbaijan to participate in the third global forum of open societies, organized by the Center of Nizami Ganjavi, named after a Persian poet from the twelfth century.

The forum is dedicated to the modern challenges of politics.

Saakashvili addressed participants during the conference. Earlier, he met with President Aliyev. Aaccording to local press, the meeting lasted more than one and a half hour.

The Prosecutor General’s Office in Georgia confirmed Wednesday that it had sent a request to Azerbaijan to detain and extradite Saakashvili, but Deputy Chief Prosecutor Irakli Shotadze told journalists that they have not yet received an official answer.

Media in the neighbor country write that the government rejected Georgia’s appeal.

The ex-president said the Prosecutor General’s Office’s notice will have a negative impact on Georgia’s image.

Saakashvili’s party, the National Movement, along with the Free Democrats, lead by former Defense Minister Irakli Alasania, claim the appeal by Georgian prosecutors has no justification and may harm the country’s international relations.

Georgia has also sent a request for Saakashvili’s detention to Ukraine, where he is currently advising the president about reforms, but that request was also rejected.

Georgia has not sent extradition requests to western countries about Saakashvili.

Recently, Interpol recalled a red alert for the detention of former official Zurab Adeishvili, and Georgia has received rejections about the extradition of several other former officials, most recently ex-counterintelligence chief Data Akhalaia, who is in Greece.

Criminal cases were launched against Saakashvili after he served out his second presidential term and left the country. He is charged in four cases: embezzlement of state money; the murder of Sandro Girgvliani; the violent dispersal of an anti-government rally on November 7, 2007 and breaking into and shutting down Imedi TV, later also appropriating the TV company; and lastly the beating of former parliamentarian Valeri Gelashvili.