TBILISI, DFWatch–One of the three terrorism suspects killed in a shootout with police on November 22 might be a Chechen who oversaw the Ataturk Airport bombings in 2016 which claimed 45 lives.

Vakhtang Gomelauri, head of the State Security Agency (SUS), confirmed on Sunday that authorities are considering the possibility that the ethnic Chechen and ISIS member Akhmed Chatayev is among the dead.

As previously reported by DFWatch, Chatayev was suspected of masterminding the attack against the Ataturk Airport in Istanbul last year.

“There is suspicion that Akhmed Chatayev is among the deceased,” Gomelauri said on Sunday, at the funeral of security officer who was killed in action during the police siege.

But he added that the Chechen’s identity remains to be confirmed by forensic experts, and that “our strategic partner, the American side” is also taking part in the investigation. 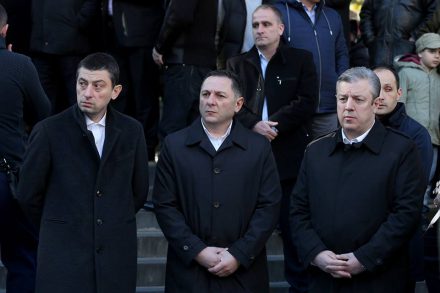 Minister of Internal Affairs Giorgi Gakharia (from left), SUS head Vakhtang Gomelauri, PM Giorgi Kvirikashvili at the funeral of one policeman who was also killed in the shootout. (SUS/facebook)

The SUS director’s statement is puzzling because the 37-year old ISIS fighter is, or was, a double amputee, having lost his right arm and left foot on separate occasions. Local media have tried asking: was there a double amputee among the dead? But so far, SUS has declined to answer any questions from journalists.

Akhmed Chatayev, born in Chechnya, Russian federation, in 1980, participated in the second Chechen war, in which he lost his arm. He then fled to Austria, which granted him refugee status in 2003. In 2010, he was detained in Ukraine and faced extradition to Russia, but the European Court of Human Rights called on Kiev not to hand him over to Russian authorities. He was then sent to Georgia, where he stayed for a while, presumably in Pankisi Gorge, 160 km northeast of Tbilisi, a place populated by Kists, who are ethnically close to Chechens. 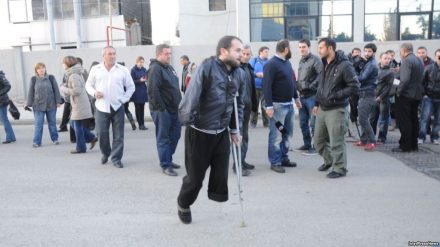 In late August, 2012, he was involved in a deadly skirmish on the border between Georgia and Dagestan, one of the constituent republics of the Russian Federation. He was injured and had his foot amputated in the so-called Lopota incident, which strong voices including the ombudsman have suggested still needs to be thoroughly investigated, due to inconsistencies in the available information.

Chatayev was put on trial for his involvement, but acquitted and released in early 2013, due to lack of evidence. After that he left Georgia and joined the ranks of ISIS.

In 2015 Akhmed Chatayev was designated as a foreign terrorist by the UN Security Council and the US.

“Chatayev is being designated today for acting for or on behalf of ISIL. As of mid-2015, Chatayev was a member of ISIL and was part of a group of militants that was planning attacks against U.S. and Turkish facilities.  Text accompanying a video posted online in February 2015 […] indicates that Chatayev is the commander of the Yarmouk Battalion, a Chechen faction of ISIL,” the US Department of Treasury’s statement reads.

On 28 June 2016, gunmen armed with automatic weapons and explosive belts staged simultaneous attacks at Ataturk Airport in Istanbul, Turkey. Forty-five people were killed, in addition to the three attackers, and more than 230 people were injured. Turkish authorities placed the responsibility for the attack on Akhmed Chatayev.

Both sides in Georgian politics blamed on each other in regard to Chatayev. Some within the ruling GD party claimed he was an agent for former President Saakashvili, while supporters of the UNM party blamed the GD government for his acquittal in 2013.