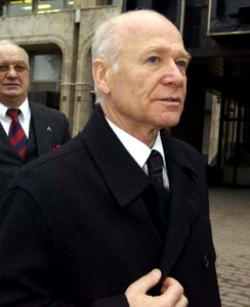 TBILISI, DFWatch–Aslan Abashidze, the ruler of breakaway Adjara who fled the country after the Rose Revolution, was Friday sentenced in absentia to 15 years in jail for a murder 25 years ago and other crimes.

Abashidze was head of the Autonomous Republic of Adjara from 1991 to 2004, when it was a breakaway territory. In the wake of protests in May 2004 he fled to Russia, where is currently living.

“Based on the evidence examined by the Court, it has been proved that on April 30, 1991, in exceeding the limits of necessary defense, using a firearm, Aslan Abashidze killed his deputy, Nodar Imnadze, in the building of the Supreme Council of the Autonomous Republic of Adjara,” the Prosecutor General’s Office wrote in a statement.

“In addition, in 1993-2004, abusing his official powers in the capacity of the state-political official, Aslan Abashidze formed an illegal armed group (band), which was led by himself. Furthermore, it has been established that, on May 2, 2004, Aslan Abashidze, together with other persons, organized acts of terrorism, in particular, explosion of Choloki and Kakuti bridges, and in the month of April, 2004, he ordered the planting of mines on the sea coast in the resort town of Chakvi, Kobuleti, Georgia. This was followed by an explosion on August 21, 2004. He also failed to execute a court decision and unlawfully deprived Tengiz Asanidze and others of their liberty.”

Gogitidze was sentenced to 12 years in jail, Khalvashi to four years and six months and Kurtskhalidze to 6 months in jail.

Jemal Gogitidze and Elguja Jincharadze were also found guilty, but the court did not impose any penalties because they are dead.

After the Rose Revolution in November 2003, Aslan Abashidze issued an unlawful decree about announcing a state of emergency in Adjara. Afterward, he refused to be loyal to the central government.

Abashidze ordered a bridge over the river Choloki blown up in May 2004. An opposition protest was dissolved, but the protests didn’t stop. Military divisions in Adjara began to  support the central government. On May 6, he lost control of Adjara and was forced to resign. He left the autonomous republic together with the Russian government’s representative, Igor Ivanov.

In December 2005, the Prosecutor General’s Office opened a criminal investigation against Abashidze and declared him wanted. He was charged with terrorism and corruption. In March 2006, one more charge was added, that of murdering his deputy Nodar Imnadze in 1991.