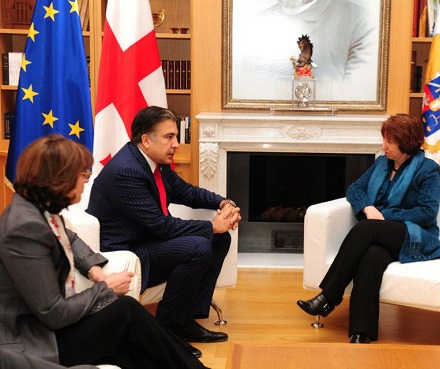 Briefing the media at Sheraton Metekhi Hotel, Catherine Ashton said she arrived to congratulate both Prime Minister and President on achieving for the first time a democratic handover of power after Georgia declared independence in in 1991. She also thanked both of them for their recent visits to Brussels.

“I urge them both to continue to use their offices and institutions to contribute constructively to Georgia’s good governance,” she said.

EU calls on all parties in Georgian politics to uphold European values of democracy, freedom and the rule of law.

“This should be no selective justice, no retribution against political opponents,” she said, adding that investigations of past violations should be impartial, transparent and in compliance with the rule of law.

The EU foreign policy chief welcomed Georgia’s dedication to negotiations on the proposed Deep and Comprehensive Free Trade and Association Agreement, expressing hope that the process will end soon.

“I invited Georgia to begin negotiations with EU on framework agreement of Georgia’s participation in EU crisis management operations,” she said, noting that she welcomes Georgia’s generous offer to host the next informal Eastern Partnership dialogue in Tbilisi.