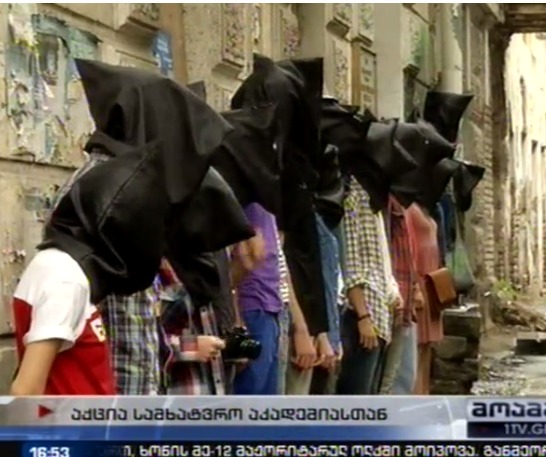 TBILISI, DFWatch–Art students in Tbilisi protested Monday against what they see as a backward teaching style and an outdated understanding of art.

Students at the Academy of Arts demand transparency and changes in the procedure for electing a rector.

Their protest has been going on for months already, not only about the rector issue, but also to demand improvements in the education system at their alma mater, which they think lags behind and teaches art along the same lines as during Soviet times.

Under current rules, only professors at the academy can run in the rector elections.

Students stood at the entrance of the academy with black bags over their heads, explaining that the system which is now at the academy is pushing them against the wall like they are about to be executed by firing squad.

‘We either die or remove the bags, survive and continue fighting with the system, which shouldn’t exist,” one of the students told journalists during the performance.

Having gathered more than 1,000 signatures so far, the students brought their concerns to the attention of the Education Ministry and the Culture Ministry, proposing to appoint painter Gia Edzgveradze as new rector of the academy. http://manifest.ge/main/show/148#.U7IRgfm1brz

Their petition reads that the Academy of Arts hasn’t been able to get to the grips with the European kind of art, hasn’t gotten rid of its Russian, socialist methodology and hasn’t developed in the direction of Western visual language.

Students organized a series of lectures, called ‘content of crisis’, in which public figures, like professors, painters and psychologists, came to the academy to hold lectures on different issues.

One of the students’ demands is to conduct a transparent and democratic election of rector, and to amend the university’s internal regulations to make this possible.

Another demand is to wait with appointing professors until a new rector has been elected, because the new rector with new ideas should make his own imprint on the corpus of professors.

The students also want the new rector to have experience with studying and teaching at western educational institutions, and propose their own candidate Gia Edzgveradze, who has worked in Europe for 25 years.

The academy’s administration has not commented about the student rally beyond saying that the students should bring such demands to the Education Ministry.