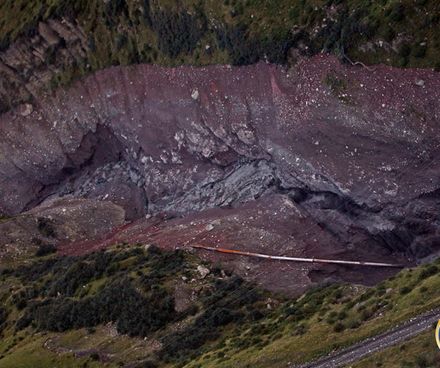 The pipeline supplies Armenia with Russian natural gas and runs through Georgia. (Photo published by Ministry of Regional Development and Infrastructure.)

TBILISI, DFWatch–Gas began flowing again Saturday in a pipeline that runs through a Georgian mountain valley which was hit by a landslide on August 21.

According to Georgia’s Gas Transport Company, the 1200mm trunk pipeline has been repaired and gas began flowing at 10:00a.m on Saturday.

Cleanup work succeeded in making the river Tergi flow along its bed, which makes it easier to work on repairing the road connecting Georgia with Russia.

A Turkish citizen was found dead on the Russian side of the border after the landslide. His body was handed over to Georgia and is now in Tbilisi for autopsy. One Georgian citizen is still missing.