Armenians and Doukhobors in Gorelovka, Georgia

Armenians and Doukhobors in Gorelovka, Georgia 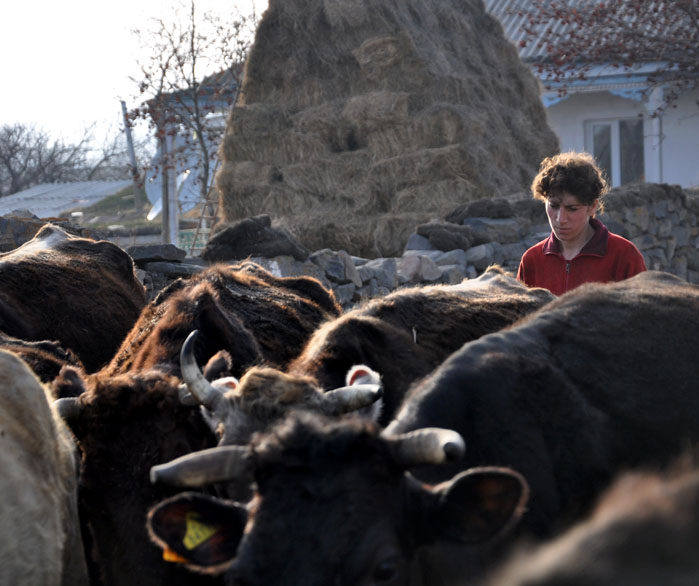 Due to the cold climate, most people have cattle as a means of subsistence in Gorelovka. (DF Watch.)

TBILISI, DFWatch–Gorelovka is a small village in Samtskhe-Javakheti, a region to the south of Georgia populated by ethnic Armenians, Russian Doukhobors and Georgians who have been resettled from Adigeni and Khulo because of landslides.

The village is small and, locals say, the winter lasts more than seven months with lots of bad weather, that is why almost everyone have cattle and hay or work at the farm.

There are no big conflicts in the village, but people tell us about minor disagreements between neighbors about agricultural lands and livestock.

According to the last population estimate, in 2002, there are 1,069 persons living in Gorelovka. 200 families are Doukhobors.

Tania is a Doukhobor who has been living in Gorelovka with her family for years. She says Doukhobors are Orthodox Christians, but without mediators.

In the end of the nineteenth century, more than 2,000 Doukhobors burned their weapon as a sign of protest against violence. They were punished and many were resettled from Georgia to Siberia. By the 1990s, there were about 4,000 Doukhobors in Georgia, but after the turn of the millenium, many left the country.

According to Tania, Russians have been living in Gorelovka since before the Armenians. They were resettled from Russia in the nineteenth century, about 40,000 of them, but more than 20,000 soon left for Canada, 6,000 for Turkey. Others went to Azerbaijan or moved to Tbilisi. 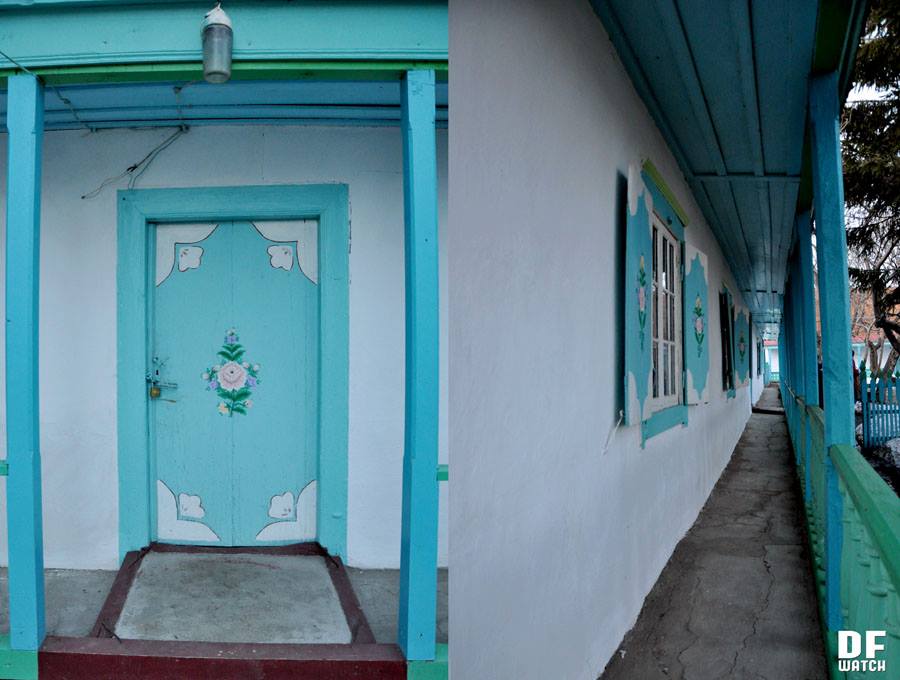 “Every Sunday, we go to our prayer house, but we do not buy a candle,” she says, adding that Doukhobors are refurbishing the prayer house themselves, no-one helps them.

She lives here with her husband and son, while her daughter married a neighbor and lives in the next house.

“A village is a village. There are problems, and if a problem can be solved, we help each other,” she says, adding that there are no big problems, but sometimes villagers argue with each other about lands.

Tania is a tall woman with silver hair hidden inside a brown traditional kerchief, green sweater and brown dress. He house is painted in green and blue colors, just like other houses of Doukhobors. She has small garden and owns several cows to sell some milk products for living. Like the others we met, she didn’t want us to take her picture. 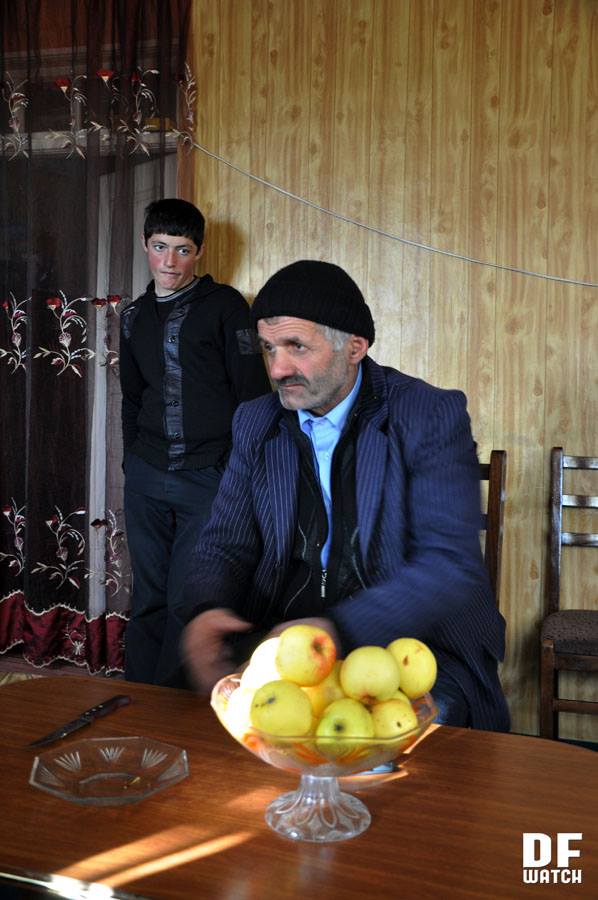 Zurab and his son at house in Gorelovka (DF Watch)

Zurab Shavadze, 68, was resettled to Gorelovka after landslide in Adigeni. He says he has to work at the farm of his Armenian neighbor because he doesn’t own land here. He has to milk cow, clean manure and do other necessary work at the farm for about 120-150 GEL (USD 70-85) a month.

“It is hard for a Georgian man to live here without land,” he says, adding that the government promised to give him land, but hasn’t received anything during the four years since he moved here.

He says there are about 220 families in Gorelovka and about 70 of them are Georgian, while about 50 families are Doukhobors.

Zurab tried to work at a tea plantation in Turkey, but he didn’t receive enough money to both live and send some to his family. That is why he came back. He lives here with his wife, son and grandson. There is water and electricity, but no gas in the village, and they use an oil heater to keep warm in winter, and sometimes wood.

“We have normal relations with Armenians, but they own everything; we have nothing. So we have to work on their land for low compensation,” he continues.

We meet Azad, an Armenian farmer, in the street with cows. He says he has no time to talk and refuses to let us walk with him, but says that the biggest problem for him and the whole village is water.

“They seem to come every year to fix water, but spend this money and in the end we have no water,” he says. 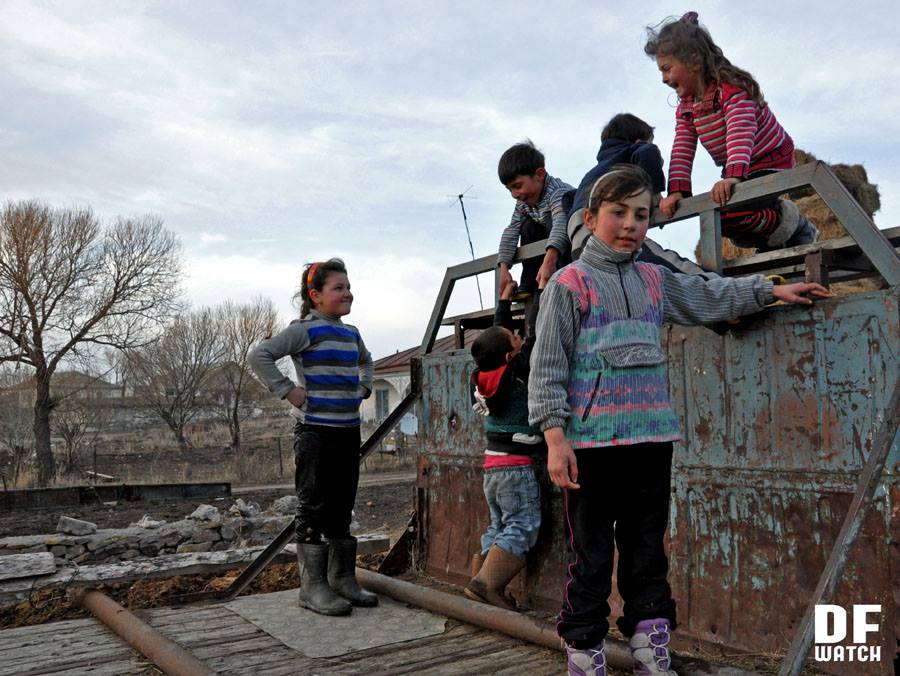 There are two schools in the village. One is for Russians and Georgians, another one is Armenian. Kids from all ethnicities play together in the yard, climbing old Soviet truck or playing in hay.

Villagers say local government doesn’t pay much attention to them. Some come right before election, give promises but never come back.

A man from Doukhobor family, who also refuses interview and pictures, briefly tells us that his life is good in Gorelovka. He lives with little daughter and wife. Has about 15 cows and sells milk products for living.

“Someday I will go to Russia, but not now. I feel fine here today,” he says getting back to his work in yard. 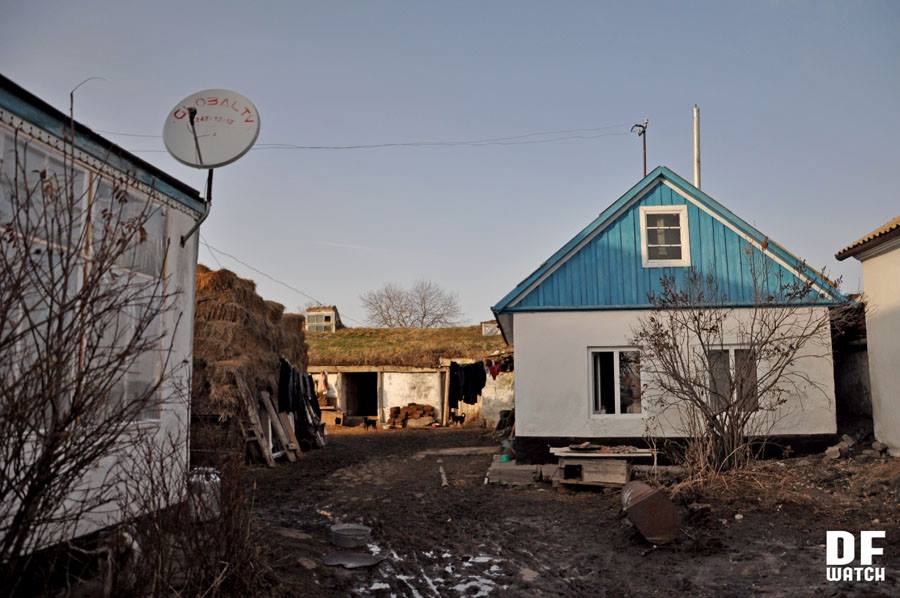 Tatiana Tkemaladze is a teacher of Georgian literature and grammar at school. She is eco-migrant from Adjara. She said one of the problems for the village is transport, because no municipal transport comes to Gorelovka from town, which is Ninotsminda.

She moved here in 2001 with two children. Many families were resettled here just like her, but many left due to bad weather and other problems.

“It is very hard to live in a village without farm,” she says adding that she doesn’t own cows, but she has little harvest of potatoes in back yard.

Her daughter married Armenian man and now she has five grandchildren, while her son studies at military academy in Kutaisi. She says there are mixed families in Gorelovka, which is normal.