Armed bank robber caught in Tbilisi, might have been a customer

Armed bank robber caught in Tbilisi, might have been a customer 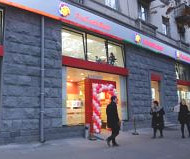 A branch of ProCredit Bank was robbed Saturday morning. (Interpressnews.)

The crime took place at about 10:45 in the morning at a branch of ProCredit Bank at 54 Chavchavadze Avenue in the Vake district.

According to witnesses, the robber had a gun and was acting alone.

Police later arrested a 32 year old man in his own apartment and found the stolen money.

Witnesses say the suspect was not wearing a mask and think he is a customer of ProCredit Bank.

The Ministry of Internal Affairs is investigating it as a violation of section 179 of the Criminal Code, about robbery.