Archaeologists in Georgia discover graves from 3rd century BC

Archaeologists in Georgia discover graves from 3rd century BC 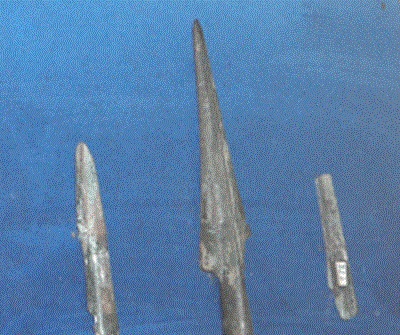 Parts of a spear were among artefacts found among a cluster of graves in Kaspi, Georgia. (IPN.)

TBILISI, DFWatch – In Georgia, archeologists have discovered burial chamber from the third or fourth century BC.

The discovery was made during sewage work. The qvevri burial place lies in Kaspi, a small town 48 km away from the capital Tbilisi.

The online newspaper Netgazeti writes that the discovery is from the Hellenistic period.

Experts say, qvevri burials were popular during pagan period in the country, when dead a body was buried in a qvevri, a large pitcher normally half-buried in the ground and used for wine-making.

There were also discovered bronze jewelry and part of a spear.

According to the news site, the find included four graves. Currently archeologists are cleaning the site and do not exclude that they will find another qvevri grave there.

There have been several discoveries during the last month. During rehabilitation work in the capital workers discovered a stone wall from fifth century C.E. The ruins are being prepared so that visitors may see them.

Last week, archeologists discovered the ruins of an old basilica church which may be the largest basilica in the country. These ruins are also from the fifth century.