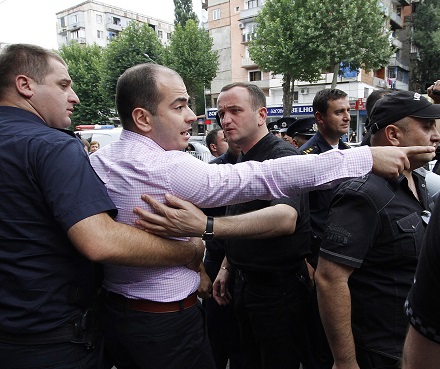 The protesters demanded that the Saakashvili regime be brought to justice. (Interpressnews.)

TBILISI, DFWatch–Tbilisi City Court on Sunday released three persons who were detained on Saturday during a scuffle outside the National Movement’s party conference and gave them a 100 lari (USD 60) fine.

Davit Chantladze, Irakli Chubabria and Pridon Merebashvili were detained on Saturday during a protest rally in Tbilisi against the National Movement, which was holding their last primary election to select a candidate for president.

The rally was organized by former political prisoners. They demand that the regime of the previous government is brought to justice.

The three were detained during a confrontation with one of the UNM members.