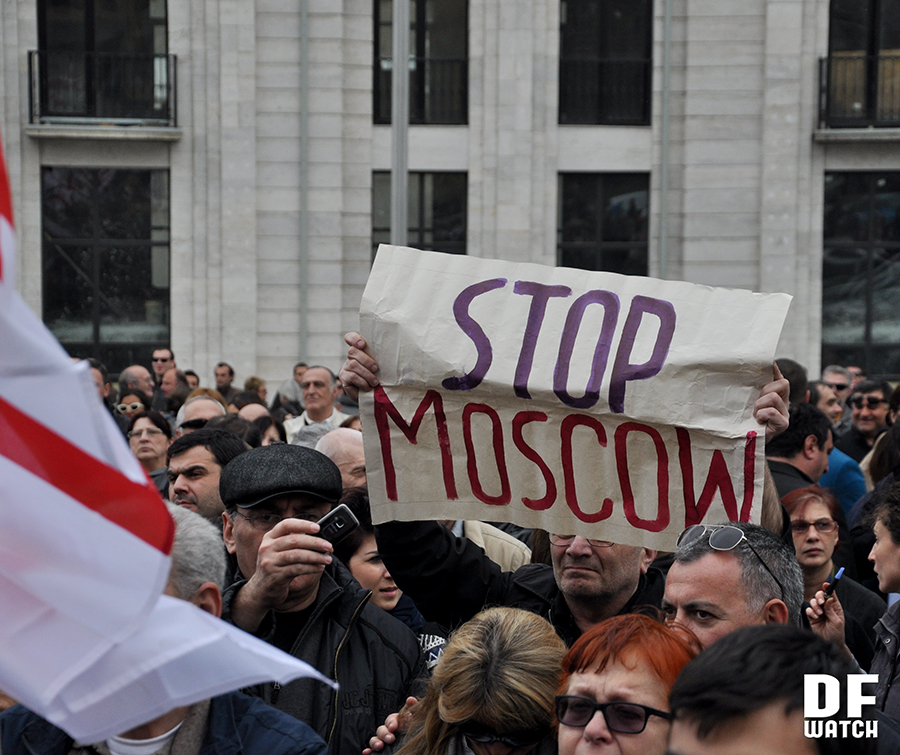 The anti-Russia demonstrators want to ban organizations cooperating with Russia and to make it a crime to publicly deny Russian aggression against Georgia. (DF Watch.)

TBILISI, DFWatch–An anti-Russia rally outside the government office in Tbilisi Sunday demanded a ban on organizations cooperating with Russia and making it a crime to publicly deny that Russia is an aggressor.

The rally was called ‘No to collaboration! No to cooperation with enemy!’

Organizers say the reason it was held was recent pro-Russian activities in Georgia.

“Representatives of Russia financed political parties and organizations regularly visit Moscow where they have criminal negotiations with official bodies of the occupant country about the future of Georgia,” they explain, adding that it was necessary to unite against collaborative organizations and marginalize them.

A group called Iveria was behind the rally. Several well-known National Movement politicians were seen attending it. Grigol Vashadze, a former foreign minister from the National Movement party says the rally was a response to events in Ukraine and is directed against pro-Russian forces in Georgia.

He said he thinks that if it continues Georgia may witness a Ukraine scenario in the future; that is why it is necessary for society to react.

Nika Rurua, former culture minister from the National Movement, said that the government must do its best not to let these organizations further the interests of Russia.

Iveria wants the government to prohibit organizations which aree cooperating with Russia, and prepare a bill making it a crime to publicly deny Russian aggression against Georgia, occupation of part of a sovereign country and ethnic cleansing by Russia in Abkhazia and South Ossetia. Further they demand a prohibition on the public display of Russian symbols, to control the process of Georgians getting Russian citizenship and prohibit the broadcasting of Russian TV channels in Georgia.