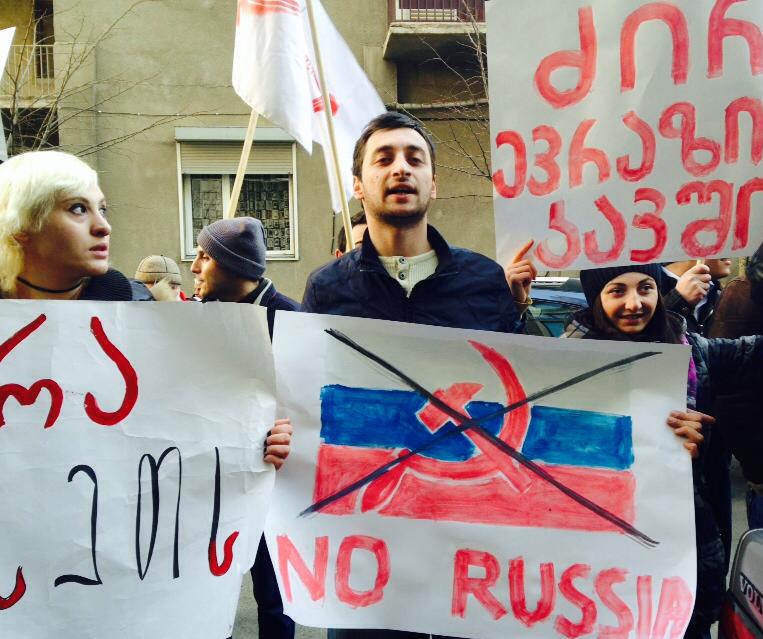 The organization Free Zone protested against a conference to further closer relations between Georgia and Russia. (Photo by Free Zone.)

TBILISI, DFWatch–Four members of the organization Free Zone were detained on Friday during a protest against a meeting at Hotel Vere-Palace in Tbilisi dedicated to closer relations between Georgia and Russia.

Demonstrators blocked the road as they blew whistles and held posters, shouting messages against Russia and against occupation. Representatives of the hotel called the police.

Members of Free Zone said at a press conference the same day that the police tore their posters, verbally abused participants and took some of them into the police car.

The detained protesters will appear in court on Saturday at 12:00. One of the detainees, Makharashvili, was released. The remaining three have been moved to a detention isolator.

Free Zone members demand to release the detainees. After the detention on Friday the organization’s members held a small rally at the Ministry of Internal Affairs against what happened.

Civil Movement for Russia-Georgia Dialogue and Cooperation held a meeting at Hotel Vere-Palace on Friday with a goal to study and research relations between the two states. Free Zone organized a rally against it.