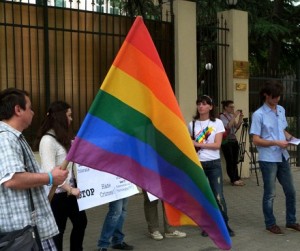 It turned violent when two groups wanted to mark the international day against homophobia. Five people were arrested, two of them were priests. (Photo: Londa Beria.)

TBILISI, DFWatch – A celebration of the international day for the fight against homophobia Thursday turned violent as demonstrators were beaten and posters torn.

Members of the two organizations LGBT Georgia and Identoba and their supporters held the event in front of Tbilisi Philharmonic. The purpose was to protest against hatred towards people with non-traditional sexual orientation.

Identoba later released a statement saying that the peaceful demonstration was dispersed.

“Strangers bared street, including members of Orthodox Parents Union and several clerics. They assaulted us and then they started beating.”

On their way down Rustaveli Avenue near the subway station, members of Union of Orthodox Parents and Union of St King Vakhtang Gorgasali appeared and blocked the street. Some citizens also joined them to help disperse the event.

Organizers of the event say they had informed the Interior Ministry about their rally. Policemen were present at today’s event, but participants say they failed to prevent the violence. The only thing the police did was to form a human chain between the two sides, but this did not prevent the demonstrators from being beaten with fists.

Several participants tried to block street traffic, but police arrested them. There was a physical scuffle between a passer-by and one of the organizers, Levan Berianidze, who was also arrested.

Five people were detained today, three event participants and two priests, but all were soon released.

Event participants were carrying colorful posters and LGBT flags. Members of Orthodox Parents Union, some of them priests, tore their posters and trampled on their flags.

This organization is known for showing up at events like this. A few years ago, they called for the closure of a popular TV show on the Public Broadcaster. The program contained open discussions on traditions, religion, and sexual orientation. Two years ago, it broke up a Halloween celebration on Shardeni Street. The “Orthodox parents” arrived with wooden crosses together with priests and that time too beat the activists.

Today, the Public Defender released a statement related to International Day against Homophobia.

“I consider that contributing to a culture of tolerance, including taking an interest in the rights and problems of lesbian, gay, bisexual, transgender, and intersex people, should become a very important task for politicians and representatives of the civil sector and the media. It is only in this case that it will become possible for our state and society to develop in a democratic and liberal direction.”

He adds that everyone should work together to create an environment which is free from any kind of hatred and in which everyone is equal regardless of their sexual orientation and gender identity.

Davit Isakasdze, one of the leaders of Union of Orthodox Parents told Pirweli they blame Ombudsman for what happened.

“It wasn’t a rally against homophobia,’ he said, ‘this is promoting lewdness and depravity. Participants presented the rally as a demonstration against homophobia and this is merits of Public Defender. Actions of Giorgi Tugushi can not endure any criticism anymore.”

The U.S. Ambassador to Georgia, John Bass, commented in a statement that he believes a modern democratic society that supports full implementation of universal human rights, needs to have a space in that society for people of every sexual orientation and that just like any other citizen, members of those communities should be able to express themselves in public in a peaceful way without suffering fear of retribution from other people in society, even if they disagree with them.