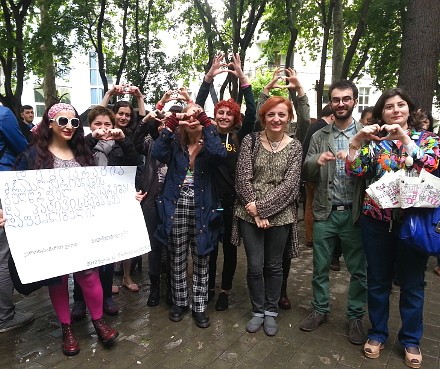 TBILISI, DFWatch–When groups in Tbilisi wanted to mark the international day against homophobia May 17, they had to organize it in tightly-controlled secrecy and gather in silence.

Time and location was secret, and everyone who showed up, including journalists, had to register beforehand and go through a vetting process, where journalists for media that have espoused homophobic views were excluded.

A few dozen people gathered in Round Garden, in Tbilisi’s Vake district, at 11am. The garden has four entrances which each leads to a street, and is therefore suitable for quick evacuation. The mostly young people there were surrounded by hundreds of police, who arrived in yellow municipal buses.

The gathering progressed peacefully in near silence; without the shouting of slogans and whistling and noise often used in political demonstrations here, underlining the sensitivity of the subject matter.

Several tens of anti-gay activists demonstrated peacefully some distance away from Round Garden, without being aware of the presence of gay rights campaigners nearby.

The main message at this year’s International Day Against Homophobia, Transphobia and Biphobia in Tbilisi was a ruling by the European Court of Human Rights, which a few days ago sentenced the government of Georgia to pay more than 33,000 euros to thirteen people for damages after being attacked during a May 17 event in 2012.

“…the duty of the State authorities to ensure freedom of assembly and speech, as well as the physical security of all persons who take part in legal demonstrations which are held simultaneously.”

“LGBT community feels being in risky situation,” another poster read.

The gathering went on in near silence, without any shouting or use of whistles.

Irakli Vacharadze, leader of the rights group Identoba, said today’s gathering was dedicated to the ruling of the Strasbourg court, which decided that ‘democracy means people respecting each other.’

That’s why participants brought quotes from the court ruling, he explained.

Other participants said that it is not enough to have a legislation which protects minorities. The laws have to be properly enforced.

Some think today’s gathering was proof that it is possible to express one’s opinion without being attacked, but others think it is comical when people have to use such a degree of secrecy in order to make a statement. 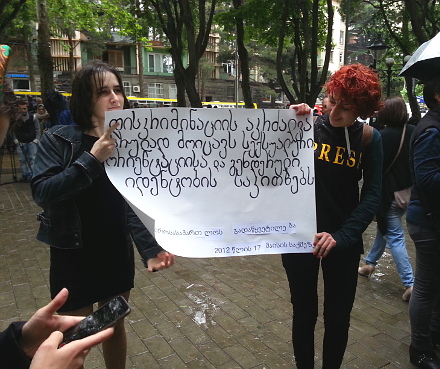 Earlier the same morning, several people showed up at Vachnadze Street, where peaceful protesters were violently dispersed on May 17, 2013. There was a 15 minute gathering there, including posters and umbrellas with the message ‘25th article of the Constitution’, which guarantees freedom of assembly. The small protest was a part of an online campaign launched by Women’s Initiatives Supportive Group called ‘This street is taken.’

There was a third gathering outside the Prosecutor General’s Office, organized by LGBT Georgia. At this one, there was no police protection. Around 30 people were gathered to demand that the Prosecutor General’s Office prepares a draft bill that makes it easier for people who have changed their sex to change their ID documents. They also claimed that the Ministry of Justice is responsible for enforcing the ruling by the Strasbourg court about May 17, 2012.

Protesters held posters that read ‘everyone is equal’, ‘I changed sex, you change my ID.’ Some also carried rainbow flags. The rally ended without incident.

An anti-gay rights demonstration took place near Rustaveli, joined by several tens of people, including clerics. They said they came to mark Family Purity day, which the patriarch announced last year. The demonstration headed to Sameba Cathedral in nearby Avlabari.