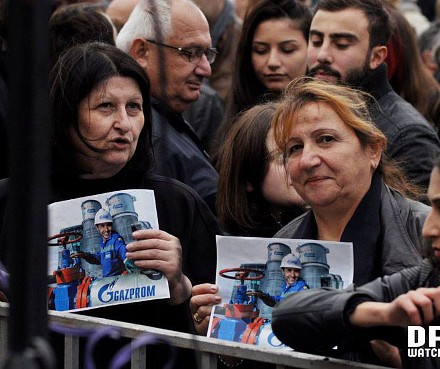 TBILISI, DFWatch–Businessman Bidzina Ivanishvili’s residence in Tbilisi was Wednesday besieged by protesters opposed to the government’s negotiations with the Russian company Gazprom.

In September, the Energy Minister revealed that there have been talks with Gazprom about increasing the transit of gas through Georgia to Armenia, and possible benefits from that, as well as the possibility of importing more gas to Georgia as an alternative to Socar, the Azerbaijani company which is now the largest supplier of gas to Georgia.

The protest was organized by something called Georgia for Liberty and held outside Ivanishvili’s home. The businessman is seen as a godfather of Georgian Dream coalition. He served as prime minister for a year, but even after retiring he is still perceived as the top decision-maker.

Organizers said the government plans to sign an agreement with Gazprom before December, 2015, but recall the words of President Aliyev, that Azerbaijan is ready to supply Georgia with the necessary volume of gas, a supply they consider more stable and less expensive.

“Russian gas is expensive and unstable. It’s a weapon of blackmail.”

Georgia for Liberty includes NGOs like Liberty Institute, TDI and Grass. They believe that the decision to increase gas import from Russia is political rather than economic.

When President Ilham Aliyev visited Georgia on November 5, he said that Azerbaijan has enough storage of gas in order to supply its own people for 100 years, but also export it to the neighboring countries.

This is the second anti-Gazprom demonstration. About a month ago, hundreds of people gathered at the government office to protest against the decision to increase the import of Russian gas.