Another minister resigns in Georgia

Another minister resigns in Georgia 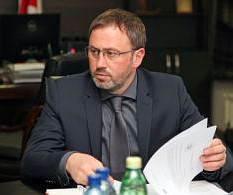 TBILISI, DFWatch–The environment minister resigned in Georgia on Tuesday. Elguja Khokrishvili explained that he needs to spend time with his family, which is living abroad.

Khokrishvili is the second minister to resign this month, after the minister of regional development and infrastructure.

When just a few ministers are replaced, the prime minister has the right to dismiss or grant a resignation request without asking the president and parliament, but if as much as a third of the government is restaffed, than the approval of the legislative assembly is necessary.

In his short statement, Khokrishvili wrote that he needs to be with his family, which is living abroad, as he has opportunities to continue his professional activity and live with his child. He also wrote that he spoke about this decision with the head of government, who agrees.

PM Garibashvili approved the resignation of the environment minister and so far it is not known who will replace him. Khokrishvili was appointed last summer in a government reshuffle, replacing Khatuna Gogoladze.

Tuesday Shalva Shavgulidze, MP from the Free Democrats, the Alasania-led party which left the coalition in November, told journalists that one more minister needs to be replaced in order for parliament to approve the new government.

“If we look at the trend of how ministers are being replaced, I think it is expected that one more minister will go.”

Garibashvili said he will name the new minister in a few days. “I really feel sorry that he cannot continue work, but he had a valid excuse, that his family lives in Germany. Since family is really precious for me as well, I couldn’t dissuade to him.”

The Georgian cabinet has 19 ministers, plus the prime minister. Since six ministers have now been replaced, is a seventh minister goes, parliament will have to declare trust in the government again.

Parliament declared trust in the government last time in the summer of 2014. A few months later, when Defense Minister Irakli Alasania and his allies left, there appeared signs of crisis in the government. Three ministers were replaced. Alasania, who was sacked, and the foreign minister and Euro integration minister, both of whom resigned in protest against Alasania’s dismissal.

Later Chikaidze resigned. He was often criticized by the opposition, whereas the government never said anything critical about him. After leaving, he is hardly remembered by anybody.

Now, after six ministers have been replaced, many believe that there will be more changes, most likely in the economic group of ministers, because of the drastic drop in the the value of the national currency.

In case one more minister is replaced, the government will be dissolved and the new government needs the votes of 76 MPs out of 150. The prime minister will have to consult with the Georgian Dream coalition for its support. Another step is that the legislative assembly will have to present all the candidates for nineteen ministers, plus the prime minister, to the president for his approval.

In case the president or parliament disapproves of the new government, they will have to propose their own candidates. If the legislative assembly refuses to approve them again, then the president will dismiss the government.

It is unlikely, however, that the new government will fail to gather enough support. The Georgian Dream coalition controls enough seats to approve the government on its own, and the president doesn’t openly oppose the coalition.

“If the government needs a declaration of trust, this won’t be a problem,” PM said.